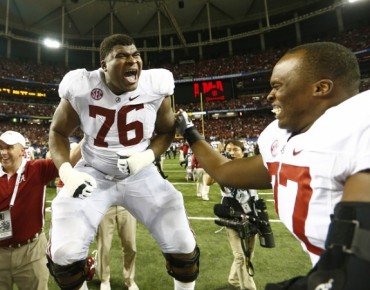 Huge frame that comes with extremely long arms and just screams dominant. Effective against bull rushers because of his long arms and strong legs.

Does a nice job of holding leverage and not getting pushed into the backfield. Can take down defenders within seconds of the play developing, allowing him to move onto the next block.

Plays smart, able to identify blitzes. Latches on to defenders, and doesn’t seem to let go, driving them back, down, or away from the play. Plays with consistent knee bend, avoiding the urge to stand straight up out of his stance.

Versatile, having the ability to move to either guard position at the next level.

He’s not as quick as we’d like, which is why some NFL scouts see him as a right guard. Isn’t a “lights out” pass protector. He will struggle against edge rushers that have a very quick first step.

Sometimes will lunge and miss a block that proves to be costly. Doesn’t change direction very well, allowing quicker defenders to “juke” him. Could be more aggressive with his punches, sometimes failing to extend his arms to keep the defender off.

Fluker is a mauler of a tackle that could play right tackle or even kick inside to guard if need be. His huge 36 3/4 inch arms are what makes him stand out as a top 20 prospect in the 2013 NFL Draft.

While he’s not overly athletic, he’s in better physical shape than former Crimson Tide mauler Andre Smith and has had no concerns of being unhealthy.

Fluker is also a stand up guy in the locker room and off the field. He’s been humbled by tragic experiences in his past that have helped motivate him for greatness. He’s a potential top 10 pick, and a sure lock for top 20 come time for the NFL Draft.