2013 NFL Draft: Five Options For the Kansas City Chiefs With the #1 Pick 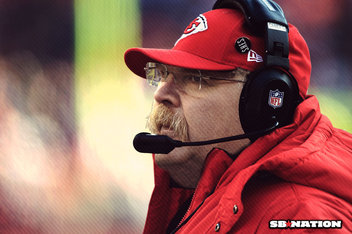 What will Andy Reid and the Chiefs do with the #1 pick?

The Kansas City Chiefs are on the clock. Not literally, but as the team with the number one overall pick in the 2013 NFL Draft, they might as well be. New head coach Andy Reid and co. have a little over two full months to scout players and decide who (if anyone) is worthy of the number one overall selection.

That brings up a fair point: is there anyone worthy?

In my opinion, there are two players that are legit #1 pick candidates that truly have the talent and value – that also probably deserve to have their names called first. Neither happen to be play quarterback – a position the Chiefs badly need to address.

Those two guys are Texas A&M offensive tackle Luke Joeckel and Utah defensive lineman Star Lotolelei. However, as previously stated, it’s not always just about who the best player is or who brings the most value. Sometimes it’s about need, as well. And the Chiefs need a quarterback.

So, with all that hot air dispensed from my mouth onto the computer screen (mine, not yours. thankfully, right?), let’s dive into the top five players the Chiefs will consider, and my prediction (that may or may not change come five minutes prior to the draft, of course) for who they’ll settle on with the top pick in the draft:

No Brandon Albert? No problem. If the Chiefs want to save some cash and let their stud tackle go, they can just spend their #1 overall pick on Joeckel, the top tackle in this year’s draft. Joeckel has outstanding size and athleticism for the position and is as sound fundamentally as they come. He’s already better than a lot of pro tackles, and would start from day one and put whoever is throwing passes for KC at ease. My only question is whether or not you draft a likely sure thing, or pay to keep a definite sure thing in Albert?

The Chiefs are possibly losing two defensive ends via free agency this year, while the jury is still out on last year’s first-rounder, Dontari Poe. That makes Star Lotolelei a major asset for KC, as he has the size, athleticism and versatility to move all over the defensive line and cause major problems for the opposition. There’s a ton of buzz surrounding him and the possibility of going number one, and for good reason. There just aren’t many players that can do the things he can. When you factor in his size, strength and speed for a DL, it’s actually pretty remarkable. There’s always the chance the hype gets to be too much and he can’t match it, but I’m not buying that. He’s a really special talent and he’d meet a need for the Chiefs.

Smith is the top-rated quarterback if you ask many, which is why I’m listing him ahead of Barkey here. He’s more athletic and arguably has a better ceiling, but there are unanswered questions. I think his offensive system made him look a lot better than he really is, while he’ll have a transition from his offense to those of the NFL. He has the skill-set to be a very solid starter at the next level, but he doesn’t jump off the screen and wow me. I’m just not convinced the Chiefs would be getting a sure thing in Smith.

I like Barkley. I know he’s not an athletic freak and doesn’t have a cannon arm, but he’s pro-ready, is comfortable in the pocket, has played well in big games, and has foot mechanics and footwork. The shoulder is a concern at the moment, too, but time will show it’s not all that big of a deal. After all, Sam Bradford had a shoulder issue, and he still went number one to the Rams a few years back. I’m not saying Barkley is Bradford, but I think expectations have been insane for this kid. He was a legit candidate to be a very early pick a year ago, and now scouts suddenly hate him and think he’s a second rounder. I’m not buying it. He’s not another Jimmy Clausen. The kid is a gamer, and in the right situation (you know, like playing under a GURU like Andy Reid) he’ll have an immediate impact and thrive. If I had the pick and I was hell bent on drafting a passer, Barkley would be my guy.

Yeah, there is no real “fifth option”. If the Chiefs don’t fall in love with one of the four guys above, I’m guessing they won’t find someone else worth drafting number one overall, either. That could force them to trade down a few spots, with the Jaguars, Eagles, Raiders and maybe even the Lions or Browns considering trading up to snag a better player. Philadelphia currently makes the most sense, as they’re probably ga-ga over Joeckel at this point, and getting the top pick would ensure that they’d get him.

Ultiamtely, it’s still wide open and a number of things could happen. But in the end, I think the Chiefs get “their guy” at quarterback either through a trade or in a later round. I also think they bring back offensive tackle Brandon Albert, which lessens the need to draft Luke Joeckel. If both of those things happen, Star Lotolelei will be the top pick in the 2013 NFL Draft.

One Response to 2013 NFL Draft: Five Options For the Kansas City Chiefs With the #1 Pick