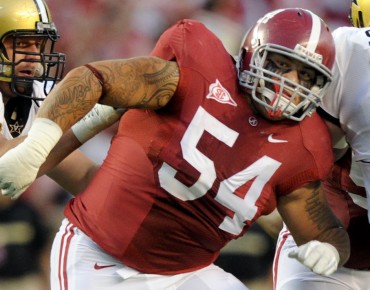 Experience in the 3-4 at Alabama is excellent, playing nose tackle for majority of his career. May be a fit for a five technique at the next level, but could still play zero technique with additional lower body strength. Upper body strength is excellent. Will be a space eater somewhere on the defensive line at the next level. Solid awareness overall, and a fair initial burst. First round potential is there, but a safer pick in the middle of round two.

Needs more consistent leverage, but when he does stay low he can be dominant. Not much of an athlete and his lateral ability struggles. Pass rush is very limited and is unlikely to develop. Could afford to use his hands more violently. Will need to bulk up his lower body to make a big impact at the next level, but could start in his first year.

Williams isn’t a great athlete or a terror pass-rusher, but he’s a massive space-eater with great strength and fundamentals. He’s mainly going to help stuff the run, but he brings a ton of value in that department, and could be worth a first round pick for the right team.

Draft Range: End of 1st to middle of 2nd