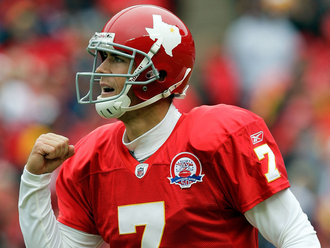 The Matt Cassel era is over in Kansas City.

The Kansas City Chiefs are in a bad way. They’ve dealt with drama with the suicide of linebacker Javon Belcher, have endure a horrendous 2012 season, and need to completely start over at the quarterback position. Add to the pile the pending relocation of star wide receiver Dwayne Bowe, and this Chiefs team has a lot of changes in the near future. With Romeo Crennel not building on last year’s late-season momentum, you can toss in a potential coaching change to the mix, as well.

Needless to say, Kansas City has done all they could in 2012 to earn the top overall pick in the 2013 NFL Draft (should they lose in week 17), and with that selection and the rest of their picks, they’ll have their work cut out for them to build themselves back into a contending franchise. That’s the first glance look, at least. In reality, they need a competent passer and a head coach that can keep the team from imploding. They actually don’t have a bad defense, have a fantastic rushing attack, and their offensive line has good pieces, as well.

Believe it or not, Kansas City might not be that far away from turning around and competing at a high level again. But they’re still this bad for a reason. Before Chiefs fans get too hopeful, they need to find a way to land a difference-making quarterback. Does that quarterback come to them in the form of the #1 overall pick? Maybe, maybe not. But they have to start somewhere.

Here’a s look at their biggest strengths and weaknesses on both sides of the ball:

Matt Cassel was inconsistent and held the offense hostage. He’s done in KC, and we’ve all seen that Brady Quinn isn’t the answer for the Chiefs or any other NFL club. The fact that KC has been so bad and still wouldn’t turn to Ricky Stanzi tells us all we need to know about him, as well. With the top pick, the Chiefs will certainly have to consider grabbing the quarterback they believe to be the cream of the 2013 crop. Geno Smith appears to be that guy at first glance, but I don’t think you can leave Matt Barkley out of the mix, either. The Chiefs could always trade down and try to nab Barkley somewhere else inside the top-10. If they don’t turn to the first round of the draft for a new quarterback, perhaps they bring in a veteran like Alex Smith, or try to trade for Matt Flynn.

After quarterback, they’ll need to continue to improve a pathetic pass offense with some wide receiver help. Steve Breaston and Dexter McCluster both have some nice talent and versatility, but they’re not really game-changers. Dwayne Bowe is, but he’s almost certainly on his way out, while Jonathan Baldwin simply hasn’t shown enough in two years to fully rely on him as a starter. The Chiefs need to grab 1-2 young receivers in the draft and bring in a veteran to give some competition to this corps. There will definitely be some guys worth targeting on the open market, such as Greg Jennings, Wes Welker, Mike Wallace and Victor Cruz. Given that KC is a losing team, though, the Chiefs are more likely to find success over-paying for guys like Danny Amendola or Brian Hartline. If they wanted to go early for Bowe’s replacement in the second, they could have a shot at guys like Tavon Austin or Aaron Dobson, among others. My guess is they build with core guys in the early rounds first, however.

Other than quarterback and receiver, the Chiefs could stand to touch up their offensive line – especially if they allow Branden Albert to walk. I say they just pay up and bring him back, but if he leaves they need to get someone to replace him. Even if he returns, they need to keep this a strength and add some nice o-line depth in the middle to late rounds of the draft, as well.

A minor issue could be the potential loss of running back Peyton Hillis, but that isn’t a back-breaker. He could even return at a cheaper price, but if he doesn’t Shaun Draughn could just backup Jamaal Charles, or a late round back could latch on. I’d like to see Hillis back, however, as he’s great on third downs and in short yardage and gives KC a solid starter should Charles succumb to injury.

Kansas City has had some issues with their pass defense and may look to find some upgrades or at the very least some real competition at safety and at corner. But first thing’s first, they need to figure out their defensive identity for the long-term. Do they stay in the 3-4, or switch to a 4-3? The personnel they have suggests they can and should stay in the 3-4, but if they do they need more help on the defensive line. Glenn Dorsey is probably gone and they need more consistency throughout the defensive line, as well. Star Lotulelei of Utah makes a ton of sense. He’s going to be a top-five pick due to his insane athleticism and potential, and he’d offer versatility all over the line. The hope is that Dontari Poe can man the middle eventually, and if he can, then the Chiefs could use Lotulelei on either side. Considering most think Geno Smith is the top pick, it’s likely KC will wait to address their defensive line until later. The position is fairly deep, so I can see them nabbing a DT or versatile DL in round two or three.

There is always talk about the Chiefs splurging in a sense and reaching for a guy like Jarvis Jones to toss outside in their 3-4, or a middle man like Notre Dame’s Manti Te’o to lead their defense. The need really isn’t there and the value isn’t enough for such a high pick. The Chiefs probably need to get a quarterback or someone to toss on their defensive line more than anything else. KC could look to corner or safety in the second or third round, with a number of options in the mix. David Amerson (corner) and LSU’s Eric Reid (safety) are just two guys the Chiefs would be lucky to choose between in the second round.

With word that the Chiefs plan to retain GM Scott Pioli, it’s likely that the team will start over at head coach and quarterback and go from there. Geno Smith makes a lot of sense, and then building the defensive line back up should be a goal, as well. As long as the Chiefs don’t forget about their secondary and do something to help alleviate the loss of Dwayne Bowe, they should be a lot better via this draft alone heading into 2013.