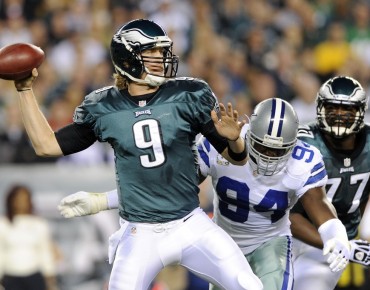 Nick Foles could be a Chief by the time the draft rolls around.

The Philadelphia Eagles did the right thing by moving on from Andy Reid. Before he was fired, he was the longest tenured head coach still existing in today’s NFL, but it was at least arguable that he had lost his team, as the Eagles missed the playoffs the past two years and completely fell apart in 2012.

With former Oregon coach Chip Kelly finally deciding to jump to the NFL, the Eagles now have new life and quite possibly a whole new brand of football. The best part, though, is that this is certainly not a team without talent. If Kelly’s high-scoring offense can translate to the highest level, the Eagles could both be entertaining and competitive right away in 2013.,

But before they can nail down both aspects, they have some work to do. Let’s dissect their main weaknesses on both sides of the ball as they prepare for the 2013 NFL Draft and the rest of the off-season:

Jason Peters is expected back, but he’s now a real injury risk and the Eagles still aren’t locked down on the other side. All things considered, selecting Texas A&M stud tackle Luke Joeckel with the #4 overall pick makes a ton of sense. With the return of Peters and another depth add or two later in the draft, a major weakness could quickly turn around to a relative strength. Center is also an area of concern, although the protection outside is the first mission when it comes to the o-line.

Philadelphia doesn’t really have a “problem” at quarterback. Michael Vick potentially fits Chip Kelly’s offensive system perfectly, while Nick Foles (although he does not fit the system) showed down the stretch that he has a future in this league. With that said, this is Kelly’s team now, so he could easily elect to cut Vick’s crazy salary, and just keep Foles as a solid backup. I’m not sure who his new guy would be, but if he drafted a quarterback, it’d likely be coming in the second round, and not the first. If that happens, Ryan Nassib and Tyler Wilson could be options if someone else doesn’t reach for them in the first round. Then again, they don’t really fit Kelly’s projected offense, either.

The Eagles appear stacked at wide receiver with DeSean Jackson and Jeremy Maclin, but they both routinely struggle with injuries and the drop-off is embarrassing at times when they’re out. Philly won’t look to spend an early pick here, but they really need some depth. They need to aim a little higher than Riley Cooper going forward.

I like Brent Celek enough, but I think we’ve seen his ceiling. The Eagles won’t suffer greatly if they just stand pat, but he’s going to be 28 before January is up and showed some real issues with health, hands and speed in 2012. The Eagles would be wise to look to add a more explosive option that can learn behind him or even pair with him in two-tight end sets. If they do, it’ll be a middle-to-late round selection.

Nnamdi Asomugha was a free agency bust. Now that we’ve accepted that, the Eagles should at least consider moving on from him. If the Eagles don’t believe in him anymore, they’ll have to target a corner early in this draft. Dropping a ton of cash in free agency probably isn’t the way to go at this point. Dominique Rodgers-Cromartie is also pretty questionable, and he could easily walk in free agency. It’s not crazy to think that the Eagles will draft two or more corners in this draft, as they could just go cheap and start over at the position. Xavier Rhodes is the name that pops up for the second round, but the #35 overall selection might be a bit early for him.

I actually like what I saw out of Colt Anderson. Formerly a special teamer, Anderson played the ball really well and did a much better job than Kurt Coleman at avoiding getting burned. He’s a long shot to return as the starter, but he might actually deserve to. With that said, both Coleman and Nate Allen were awful in 2012, and both could be in danger of losing their jobs. Philly should seriously consider taking a safety with their #35 pick, where USC’s T.J. McDonald, LSU’s Eric Reid and N.C. State’s David Amerson should all be readily available.

Philly has a decent line-backer corps with Demeco Ryans and Mychal Kendricks, but they badly need to find an upgrade on the outside to pair with those two. Khaseem Greene out of Rutgers could be a possibility in the third, while Kansas State’s Arthur Brown could be another option if he can slip into the fourth round.

It doesn’t take a rocket scientist to figure out two of the major problems in Philly were protecting the quarterback and bad play all over the secondary. If Chip Kelly can come in and make sure those two issues are addressed, the Eagles will see vast improvements. The rest of the way, if they add some solid depth pieces on the defensive line and get another young wide receiver to come in and compete, we should easily see a better Philadelphia squad in 2013.