2013 NFL Draft: Who Wins The Race For Matt Barkley? 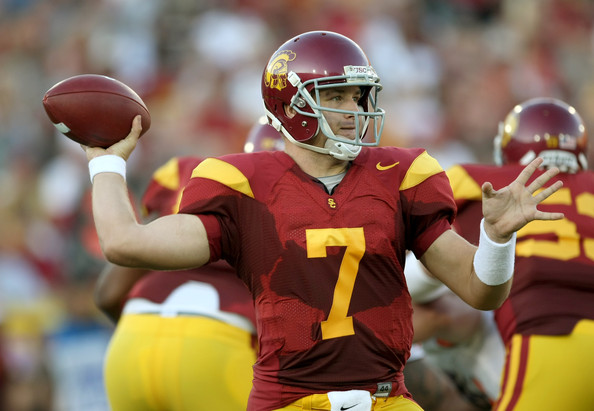 Heck, even Matt Cassel and Mark Sanchez have guided their teams to post-season play.

But it’s those elite passers that have you in almost every game, make few mistakes, and get you deep into the playoffs at the end of the year that don’t come around often. That’s why guys like Tom Brady, Aaron Rodgers, Drew Brees, Peyton Manning and have only played for 1-2 teams in their career, and someone like Matt Ryan probably won’t ever play a down as a member of any other team other than the Atlanta Falcons.

This is why quarterback routinely are top picks on a yearly basis. This is why franchises reach in the first round; in hopes that the next talented passer left on the board is the guy they’ve been missing.

For the 2013 NFL Draft, the guy everyone covets is without a doubt USC superstar Matt Barkley. He’s almost guaranteed to go number one overall. It’s just a question of who will be there, and whether or not they’re in desperate need of a potentially elite passer.

The New Orleans Saints are one of the worst teams in the league, but even if they finish dead last they’re not drafting Barkley. But someone will. Let’s take a look at which teams have a good chance of sliding to that #1 pick, and a couple others who could be in the mix to trade up to draft him come April:

The Chiefs need to start over on offense. They have an awesome rushing attack with Jamaal Charles and Peyton Hillis (when healthy), but their passing game struggles mightily due to inconsistency at the quarterback position. We know by now that Matt Cassel isn’t the answer, and Brady Quinn and Ricky Stanzi aren’t going to get it done, either.

The time is now for a transition, because the Chiefs have been floundering for years now, and really only kept Cassel around because he rode an easy schedule to an unlikely playoff appearance a couple seasons ago. Whether they actually try to kick the season to the curb on purpose, this team is destined to be a bottom-five team in 2012, and very well could be in the top spot. If they are, they’ll without a doubt grab Barkley, who would give them their first real quarterback since Trent Green.

Brandon Weeden has looked good in spurts, but if Cleveland finishes dead last, I highly doubt he’s cemented as the franchise quarterback. He’s already 29 and a new regime is taking over with the sale of the Browns complete. Unless Cleveland avoids another woeful season, the front office will be completely cleaned out, and the coaching staff and current draft picks will not be hands-off. If the new regime isn’t high on an almost 30-year old Weeden, they could easily trade him and draft Barkley, a far superior talent with youth on his side.

Is Blaine Gabbert the answer in Jacksonville? Considering head coach Mike Mularkey is already having to defense his quarterback, it’s possible he isn’t. However, he did look solid in preseason and the first two weeks of the season, so I’m not giving up on him just yet. However, if Gabbert doesn’t make serious strides by the end of the year and the Jags find themselves in the #1 spot, there’s little doubt Barkley is welcomed to Jacksonville and Gabbert becomes trade bait.

Oakland probably isn’t going to fall all the way to the 32nd overall team in 2012, but you just never know these days. If they did, this would be the best thing to happen to their new regime, as they can make-up for the Jamarcus Russell fiasco with one draft selection, and they can part ways with the aging Carson Palmer. Palmer is still a startable quarterback who can win some games, but the Raiders were forced into rolling with him this year, and would likely prefer a new, young quarterback to build a new foundation with.

Teams in Need of a QB Upgrade That Could Trade Up

Ryan Fitzpatrick is approaching 30 and he turns the ball over a ton. He does some things well and is mobile enough for Chan Gailey’s offense, but if the Bills don’t finally break their playoff drought, Fitz and/or Gailey could be on the chopping block. If that’s the case, Buffalo could potentially slide to the bottom of the league, or pull off a big trade to land Barkley, regardless of their draft position. I find it more likely that they sit back and grab someone like Landry Jones to groom behind Fitzpatrick, but they can’t be ruled out.

Mark Sanchez looks less and less like the answer in New York by the day and it’s pretty clear the Jets don’t have any real interest in using Tim Tebow as a full-time passer. If the team implodes and ends the season in horrible fashion, it’s not crazy to think they could be a bottom-five team in 2012. But even if that doesn’t happen, the Jets could still be players for Barkley via trade if an unlikely team like the Saints or Panthers finds themselves in the top spot. That is, if Sanchez or Tebow don’t keep them from wanting to make a move like that.

While nowhere close to being in position to pull it off, I think the Cardinals make almost the most sense of any team listed here. However, at 4-2 and with such an elite defense, it’s unlikely John Skelton or Kevin Kolb can send them to the bottom of the league before the season is up. However, they aren’t the long-term solutions, so the Cardinals have to be in the running to make a move for Barkley.

Ultimately, I think Barkley is destined to go to Kansas City. The Cardinals are right up there in terms of value and need, as both the Chiefs and Cardinals have solid rosters, sans an elite quarterback. Adding Barkley to either roster could dramatically change the make-up of either team in just one season.

The other teams are still fairly realistic, but either have young quarterbacks already in place, or aren’t likely to finish close to the bottom of the league. Regardless, it will be very interesting to see how this all unfolds.

One Response to 2013 NFL Draft: Who Wins The Race For Matt Barkley?