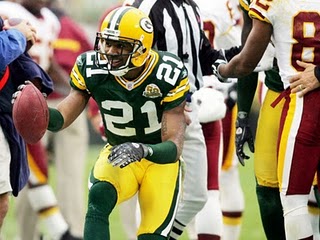 When the Green Bay Packers released cornerback/safety Charles Woodson last month, it certainly didn’t mean the end of his career. The 36-year-old All-Pro believed he could still play, and now, so do four teams.

According to Josina Anderson of ESPN via Twitter, the Miami Dolphins, New York Giants, New York Jets and Seattle Seahawks have all contacted Woodson’s camp with interest in the 2009 Defensive Player of the Year. Armando Saiguero of The Miami Herald has confirmed the Dolphins interest in Woodson.

The important point to note is that, when Woodson was released from the Packers, his agent, Carl Poston, said that Woodson would “like to play for a contender [and] win another Super Bowl.” This would leave the Giants and the Seahawks as the two most likely candidates to sign Woodson. The Giants are only one season removed from winning the Super Bowl, and the Seahawks lost a last-second heartbreaker to the Atlanta Falcons in the Divisional Round this past postseason.

But, I wouldn’t count out the Dolphins or the Jets. Dolphins head coach Joe Philbin was the Packers offensive coordinator from 2007 to 2011 and would know just how much value Woodson has. As for the Jets, they could use a corner to replace Darrelle Revis if they do indeed trade him.

With free agency set to begin on Tuesday, March 12th, it will be interesting to see which one of these teams, if any, make a strong push to sign Woodson. However, even at 36, he still has a lot to offer, both on the field and as a leader in the locker room.