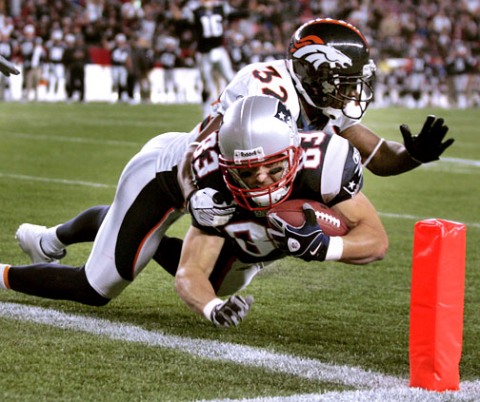 New England Patriots slot receiver Wes Welker has spent the past six seasons catching passes from Tom Brady. But a different quarterback could be throwing the ball his way in 2013.

According to Jen Slothower of the New England Sports Network, Welker and the Patriots were closing in on a deal, however, they failed to reach an agreement. So now, the 31-year-old wideout won’t sign with the team until after he tests the free agent market, which opens up next Tuesday, March 12th.

The Patriots don’t seem too concerned with re-signing Welker, who has caught more than 110 passes in five of his six seasons with the team. Slothower reports that the Patriots “have plans to sign [St. Louis Rams receiver] Danny Amendola on the first day of free agency. Amendola, 27, has received many comparisons to Welker over the last few years for his role, and reliability, as a slot man in St. Louis.

It’s hard to imagine Welker playing for anyone but the Patriots, but he must feel another team out there can offer him a better deal (well, unless he is trying to call the team’s bluff, whatever that may be). It’s important to note though that, while tight ends Rob Gronkowski and Aaron Hernandez got hefty, long-term contracts last offseason, Welker only got the franchise tag (he wanted that long-term deal as well) and was only targeted five times in the team’s 2012 opener.

Welker has been named to four All-Pro teams and five Pro Bowls during his tenure with the Patriots, while additionally leading the league in receptions three times. He has been Brady’s most consistent target, sans that drop in Super Bowl XLVI, as well as most durable.

While it seems impossible to imagine Welker with any team but the Patriots in 2013, it’s a reality that could very well come true.