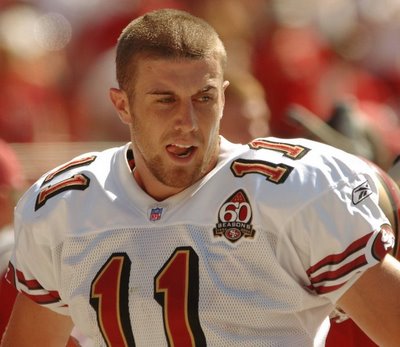 The last time the Kansas City Chiefs traded for a 49ers’ quarterback who had lost his job to injury, his name was Joe Montana. But Colin Kaepernick is closer to Steve Young than Alex Smith is to Montana, and neither will get into Canton without paying admission. Still, the Chiefs are undoubtedly a better team today, and should improve significantly over the disaster they have been. But, you’re wondering, what does this trade mean for Smith’s fantasy football prospects in 2013?

The answer is probably very little. Smith was on his way to the best season of his career, in terms of yards and touchdown passes, when he went down with a concussion in Week 10, never to return to the starting role. But Smith’s best is still a long way away from the league elite. Smith was among the league leaders in completion percentage and yards-per-attempt when he went down, which looks impressive on the surface. But all those completed passes added up to only 1,737 yards; he only had one 300 yard game, and no others over 232. He also saw an uptick in interceptions, but to be fair, he wasn’t going to go 16 games with only five picks again (he had five in ten games last year).

Basically, Smith is a caretaker quarterback. He was finally thriving in his sixth and seventh seasons in a system that ran the ball, then ran it again, and asked him to make only the occasional high-percentage pass. The results were pretty on paper, but let’s not kid ourselves – Smith was not a fantasy-caliber starting QB. In a world of Rodgers and Brady and Brees and Manning(s), Smith was a bye-week fill-in, or a borderline QB2 in two-QB leagues.

Will Smith have value? Yes, probably around the No. 20 player at the position – which means he can be ignored completely if you’re in an eight-team, one-QB league. Plus the off-season is not yet done – the Chiefs are expected to take an offensive lineman with the # 1 pick in the draft, which will obviously help, and if the Chiefs keep Dwayne Bowe, he and Smith will help each other.

BOOM: Bowe stays, Smith leads the team to seven wins or so, and puts up 3,500 yards with 25 TD passes and only eight picks. Still no A-Rod, but he does have a little upside to him if all goes well.

BUST: The Chiefs still stink, Bowe leaves, Smith’s concussions don’t heal properly as he gets knocked around behind an inexperienced line, and he only plays another half a season, with barely one TD per game. The Chiefs then take a quarterback with their high pick in the 2014 draft, thus putting an early end to the Alex Smith era.

BOTTOM LINE: Smith can be penciled in for about 3,000 yards, 18 TDs, and a dozen INTs. Again, that is fine as a backup in deep leagues, or bye week replacement, but not a difference-maker, or even someone who should be regularly rostered. He’ll be 29 this season, which is still basically in his prime, but the Chiefs were more concerned with stabilizing the position than finding a difference-maker, or having to reach for one in a poor QB draft.

About the author: Jonathan Pollak

Jonathan Pollak has finally given in and started utilizing the internet to rant about football. He has been playing fantasy sports since a pencil, paper, and newspaper box scores were needed to calculate stats. His earliest and fondest memories are of Lawrence Taylor hurting people.