Why Michael Vick is the Problem in Philadelphia 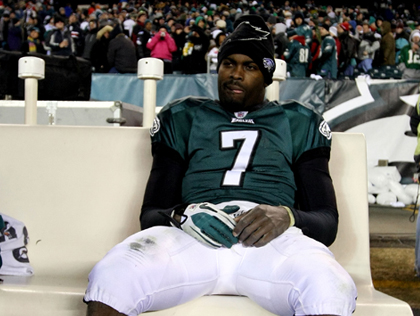 Vick was one of many fantasy disappointments this year.

Michael Vick is not even in the top 25 NFL quarterback rankings. LeSean McCoy is having a substandard year. The Eagles give the ball away like it’s Christmas every Sunday.

So to make up for all of this the Philadelphia Eagles fire the defensive coordinator.

What the hell are the Eagles doing? Firing Juan Castillo because of your team’s struggles this year is like trying to tell middle class people that your economic plan will help them by playing hard ball with poor people and giving rich people the budget savings. Oh wait, that might actually work.

Castillo is Andy Reid’s first firing of a coach in his 14 years at the helm of the Eagles. Which, of course, is code for ownership saying “You better do something, anything, so that people don’t stop showing up, paying 20 bucks to park and being drunk enough to spend $10 on a warm, flat, domestic beer.”

Reid, who each week increases his resemblance to both Wilford Brimley and a walrus, thought Castillo’s ouster was “the right thing to do.” There have been questions as to why he doesn’t bench Vick, but he really can’t afford to do that for two reasons:

His backup is rookie Nick Foles. Dude looks like a kicker, not a QB. It’s not like Reid had the sense to back up the most erratic and injury-proned QB in the league with, say, Jason Campbell. Benching Vick for Foles would remind us that he had no Plan B;

Vick went to jail. For fighting dogs. Would you instigate him by sitting him on a cold metal bench that reminds him of Cell Block 9? Yeah, neither would I.

But we have to back this up a bit. Before last season, when you signed the best defensive player in the history of the world, why would you make an offensive line coach into a defensive coordinator? That’s like making Tim Tebow a rabbi. It’s not a good idea and you’re destined for failure.

So a season-and-a-half later, you decide the Castillo experiment (your idea) isn’t working, other than the fact that by and large, it was working. The Eagles don’t remind anyone of the 85 Bears, but they are in the top half of league defenses against both the pass and the run.

The truth is Mike Vick is the problem; no two ways about it. Can he turn his (and the Eagles’) season around? You bet, but the truth is he’s led the league in fumbles twice, including in 2004 when he took the Faclons to the NFC title game. To say he’s developed a fumbling habit this year is like saying a 65 year old man who sleeps with his blanky is going through a phase.

While a move to Foles might tell us that the Eagles are officially rebuilding and taking stock in their rookie signal caller, Reid is unlikely to call it a benching. We have 20 bucks that says Vick is about two weeks away from a nagging rib/ankle/shoulder injury that will “force” the Eagles to called Foles’s number.

We wonder how much easier it might be to bench Vick if you had gotten that Jason Campell-esque backup QB. If Foles plays and fails, the never shy Eagles fans will wonder why Reid never had a Plan B behind the streaky and injury prone Vick or for hiring his offensive line coach as defensive coordinator.

Unless Reid’s personal plan B is selling oatmeal and diabetes monitors.

50 Responses to Why Michael Vick is the Problem in Philadelphia