Beanie Wells and Your Week 13 Fantasy Risers and Fallers 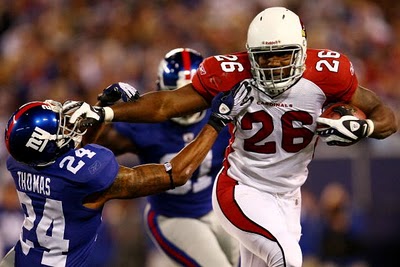 For many fantasy leagues, the upcoming slate of games is the last chance (or close to it) for you to jockey for playoff position or even get into the fantasy playoffs first and foremost. With injuries mounting and some players slumping, it’s imperative for you to fill in the holes and patch up a championship-quality roster for the next few weeks. With that said, read up and good luck!

If you’re desperate for a running back, Beanie Wells is a great pickup, seeing as he is available in about half of all leagues. Many, before this week, were concerned that Wells would split carries with Larod Stephens-Howling, but LSH only had one carry while Wells scored twice. He could be a savior for you if you need to patch up your lineup so check the waiver wire!

Matt Forte left the game with an injury and Bush ran well in his place. Bush had two scores and ran hard around the goal line. Obviously monitor Forte’s injury since there is no official report yet, but claim Bush now if you’re needy for a running back who will get goal line carries for sure.

Hilton missed some time Sunday due to a head injury, but still recorded two touchdowns, including a 75 yard punt return. This is the second consecutive week that Hilton has scored two touchdowns in a game after scoring twice and passing the century mark last week against the Patriots.

Shorts had 105 receiving yards with a score on Sunday. Shorts has been tremendous this season with big plays downfield seemingly week after week. Shorts has averaged 97 yards the last three weeks and has four touchdowns over the last six weeks. Shorts should be claimed immediately if he is already not in your leagues for whatever reason. He hasn’t missed a beat with Chad Henne taking over the Jaguars Quarterback reigns either.

Reece had another respectable week with a decent amount of both rushing and receiving yards. BUT, Darren McFadden and/or Mike Goodson will likely return by next week. If McFadden especially returns, Reece’s value will disappear. Solid pickup for sure the last few weeks, but there’s a timer on it per circumstance.

Thomas’ value is now almost completely obliterated. Thomas had 1 rush on Sunday for 0 yards and had one target in the passing game that wasn’t hauled in. Interim Head Coach Joe Vitt seems to favor Chris Ivory over Pierre Thomas not to mention Darren Sproles returning from injury and Mark Ingram in the mix as well. Ivory, specifically, was a healthy scratch early in the season when Vitt was serving his suspension, but now that Vitt is in charge, Ivory has gotten a heavier dose while Thomas’ value has disappeared.

Don’t let the touchdown reception Sunday fool you since that was his only reception on the day. That is the second straight week that Moore has had only one reception which spells trouble for owners moving forward. The Raiders offense is falling apart and Moore’s value has gone with it.

Apologies to those of you who picked up Hillman last week. Out of nowhere, the Broncos went with former first round pick Knowshon Moreno because of his excellent pass protection. Hillman only finished with three carries on Sunday. Moving forward, even if Hillman gets more carries, he will have to split them with Lance Ball and Knowshon Moreno. It’s quite simple though: Moreno started because of his pass blocking and with Willis McGahee on IR, the Broncos focus will be to throw the ball with Peyton Manning. Hillman owners should be worried.