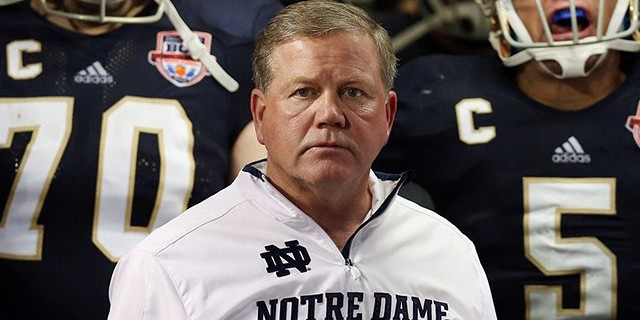 If you didn’t already know, I am a HUGE Notre Dame fan. After last Monday night’s throttling in the BCS Championship game, you can imagine my mood when I heard on ESPN this morning that ND head coach Brian Kelly had interviewed for the vacant Philadelphia Eagles job. It was reported that Kelly had a stop-over with the Eagles just before heading out of the country for a well-deserved vacation.

The meeting between the two sides was said to have “mutual interest” from both parties and that they would resume talks when Kelly returns from vacation.

After swearing up a storm for about 15 minutes, I got in my car to head to work. On the drive, I thought about the possibility of this actually happening. I came to the conclusion that there is NO WAY that Brian Kelly becomes the Eagles head coach. Let me break it down.

First, from Brian Kelly’s perspective, he’s not going anywhere…yet! Kelly’s contract was extended last year and runs through the 2016 season. His salary was being reported at around $2.3 million per season. After this past season, I’m sure he hit incentive bonuses that bump him closer to $3 million. Clearly money is not the issue.

He also has the #1 rated recruiting class coming in next season. The Irish will be primed to make another run at a BCS title. Before Kelly’s existing contract runs out, he will have three legitimate shots at a national title. So having those odds and getting the same money as he would in the NFL, his career and resume would advise him to stay where he is. Why go to the Eagles now for the same money when you have to rebuild? He can stay at Notre Dame and have a better chance at winning a national title; in which case he would be more sought after, demand more money and have done his job at Notre Dame.

Lastly, if anything else, why shouldn’t Brian Kelly at least meet with the Eagles as to just go through the process at the NFL. Can you fault him for just getting an NFL interview under his belt? Also, it gives him leverage if and when cantract negotiations come up again with Notre Dame in the near future. This is by far the biggest reason for Brian Kelly to meet with the Eagles.

From the Eagles’ point of view, this is merely the organization doing the right thing and using a fine-toothed comb to find the right guy. What’s wrong with getting different opinions and points of view on what a particular candidate has to offer. If you’re the Eagles’ management, after having Andy Reid and the same philosophy for so long, wouldn’t you want to branch out to any and every available coach, especially one that’s hot like Brian Kelly, just to get an opinion. What would he do if he were your head coach? Just listening to his ideas might give you a little more insight as to what you have not thought of yet.

All this interview is doing is giving both sides a mutual positive experience. Kelly will get to go through the NFL process and have future contract leverage with Notre Dame. The Eagles will get to hear another philosophical approach from another top-tier offensive-minded college coach (Chip Kelly of Oregon being the other).

Brian Kelly will stay at Notre Dame and the Philadelphia Eagles will have more information by which to select their next head coach. In the end, the two sides mutually used each other to better their own situation.