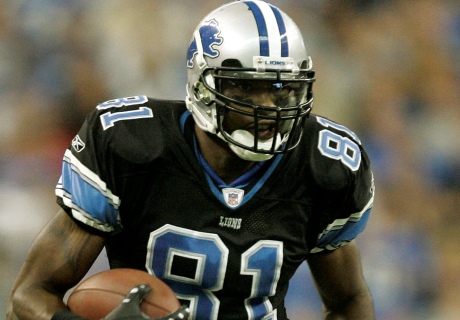 Megatron has become an absolute force.

We’re back for the Week 7 edition of Fantasy Football’s Biggest Busts, the column that you definitely don’t want to see any of your fantasy players popping up on. There was a lot of dud performances from our running backs including some monster injuries. Maurice Jones-Drew and Trent Richardson were definitely fantasy busts this week, but I hold them off the Top 10 due to injury.

This week’s fantasy football busts column features some monster stars, and some guys that have been solid so far this season. Three of the top wide receivers (Glamour Boys as I like to call them) in the NFL appear on this list as they had miserable outings in Week 7.

By the way, How about that Chris Johnson guy huh? ::smiles::

We’re here to take a look at some Week 7 busts, but also give some fantasy analysis for Week 8. Let’s take a closer look at the Top 10 players who were the biggest fantasy disappointments from Week 7:

Are Megatron owners starting to get a little worried with Calvin Johnson? Possibly. Calvin Johnson has only one touchdown in 2012  and just two games with more than six receptions. The Lions’ apparent offensive struggles have been really taking a toll on Calvin Johnson’s fantasy value. Every week, opposing defenses have been double-teaming Megatron pretty much the entire game, due to the honest fact that there is no threat on the ground or from any other receiver lining up alongside him. On Monday Night, the Bears did an excellent job of taking away the Lions’ ground attack and really were able to fully focus on #81. If I were a Johnson owner, I am not worrying. I am thinking that if the Lions offense cannot come alive, it will hurt Johnson’s potential. We all know that Calvin has his weeks where he can win a fantasy game single-handed. Johnson only managed 3 fantasy points this week, and anytime that player on the cover of Madden duds, it is sure to earn him to #1 spot on the Fantasy Busts Top 10. Johnson is at home this weekend against the tough Seattle Seahawks defense, but no analysis here, Megatron starts weekly on the All-World team.

Ray Rice was a Top 3 fantasy pick in almost every draft out there, and it’s pretty fair to say that he has not lived up to his fantasy potential thus far in 2012. In a standard league, Rice has been a 50/50 back, and his workload has obviously lessened. Rice has only one game in 2012 that he carried the ball 20 times, Shocking. He has three 20+ point games this year, but also has three awful performances. His latest dud came on Sunday, when the Ravens were steamrolled by the Houston Texans. Rice only took 9 carries for 42 yards, and mustered up 5 fantasy points, his lowest of 2012. The Ravens have opened up the playbook this year for Joe Flacco, and so far it’s been working. That could definitely effect Rice’s output. Going forward, the Ravens go to the much needed bye week.  You will have to find a replacement back this week, but I am predicting Rice to have his best game of 2012 in Week 9. Rice travels to Cleveland after the bye, and I would not be surprised if he totals 200 yards from scrimmage against his division foes.

0. If you started Vernon Davis on Thursday Night, that’s what appeared in your box score. A Zero. Nobody wants to see a zero next to a player of Vernon Davis’ caliber. Davis does have four touchdown receptions in Weeks 1-3, but since then has been really quiet. He only has 23 receptions spread out over seven games, but the red zone looks are what makes Vernon Davis fantasy goodness. I don’t trust this offense, especially in the passing game, but I still trust Vernon Davis touchdown capability. He is still San Francisco’s most reliable receiving target, and to get this offense going again they will have to dial his number. The 49ers travel to Arizona this week for a big division battle and I would probably still start Vernon Davis in this one unless I have  a good backup tight end with a nice matchup. Davis is still elite, but is definitely replaceable on a given Sunday. I give Davis a few more weeks as my starter, but the clock is ticking.

Unless you own Larry Fitzgerald in a PPR (points per reception) league, his production has been a bit pedestrian so far this season. Fitz does have three touchdown scores, but also put up four duds for far in 2012 including a zero in Week 2 against New England and 2 against Minnesota in Week 7. Much like Megatron, Fitzgerald plays in a offense that lacks sidekicks, which allows opposing defenses to really focus on the elite #1 receiver. Fitzgerald did have 32 receptions in his last four games prior to Week 7, but like I said earlier, that is only helping you in a PPR league. On to Week 8, the Arizona Cardinals are at home hosting the division rival San Francisco 49ers. A tough matchup for any wideout, but like his Pro Bowl counterpart Calvin Johnson, he is a must start on the All World team.

I know I am packing this list with wide receivers, but I promise not to get on this one too much because he has been stellar this season. But A.J. Green scored a touchdown, how can he possibly be on this list? Right, Green did catch his seventh touchdown pass of the season and now has six straight games with a touchdown score, but in Week 7, Green caught just one pass. Although it happened to be a touchdown catch, it was still one catch. He shows up on the list after racking up all six points on just one catch. A.J. Green hauled in 43 receptions prior to Week 7, making him the most consistent receiver in the NFL in 2012. After setting his own bar so high,a one catch week will earn you a spot here. Looking ahead, A.J. Green and the Bengals hit the bye week, but when they return Green will continue his fantasy dominance for you this season.

When is Oakland going to get the “Run” back in “RUN DMC? McFadden has not been his usual self this year, and I’m not talking about him just staying healthy. It’s awesome that DMC is healthy, but we are used to seeing monster performances from him when he is feeling good. McFadden only has seen one game this year where he carried the ball more than 20 times, signaling that his workload might be a little skinnier. He had really one good game against the Pittsburgh Steelers in Week 3, his only 100-yard rushing performance. McFadden is still a great fantasy option and is still the focal point of the Oakland offense. In Week 8, the Oakland Raiders will travel to Arrowhead Stadium for a divisional battle with the Kansas City Chiefs. I expect this to be a ground and pound sort of fight, and Darren McFadden will find himself in a heavyweight bout with Jamaal Charles.

Andy Dalton, otherwise known as the “Red Rifle” has become a pretty nice fantasy option here in 2012. He has racked up three 300-yard passing games, three 3-touchdown pass games, and nearly four 20+ point fantasy games thus far this season. But on Sunday Night against the Steelers, Dalton had a rough time completing anything. Dalton finished the game 14 for 28 for just 105 yards passing, adding a touchdown pass and an interception to his final score. Dalton only put up 6 points on Sunday Night, easily his worst performance of the season and earning him a spot on the Week 7 Fantasy Busts list. Dalton owners still have to feel pretty satisfied with the second-year quarterback, as he has had a solid season thus far. The Bengals head to their bye week for Week 8, but I still like Dalton to perform well throughout the year. I would start Dalton according to favorable matchups.

Ridley owners really hope that he does not become a trending name on the weekly Fantasy Busts list, but as for the last two weeks, he has. In the last two weeks, Ridley scored a measly nine fantasy points, tallying just 6 in Week 7. Ridley has found himself on the busts list for consecutive weeks since making a bold fantasy name for himself earlier in the season with three monster performances. But let’s face the facts, Ridley has had four single-digit fantasy games, and he is as hit or miss as any player in the NFL.  I still like Ridley as a RB2, but I really don’t like his matchup this week. The Patriots travel to the Edward Jones Dome to take on the St.Louis Rams and their formidable defensive unit. The Rams defense, fueled by Chris Long gets in the backfield often, as does a great job against opposing running backs.

Let’s give Joe Flacco a little bit of a break on his Week 7 performance. I mean, he did face the league’s #1 ranked defense on the road. Also, Flacco has been playing really well and has helped your fantasy team if you decided to give him any starts this year. On Sunday, Flacco was under duress all afternoon long, giving him little chance to make the most of his few opportunities. When Flacco did get the ball out cleanly, guess who was there to get his mitts on it? Who else but the NFL’s defensive poster child right now, J.J. Watt! Flacco threw two interceptions to the Texans as they got routed to say the least in Reliant Stadium. He also added a lone touchdown score, and 147 yards passing mustering up just 5 total fantasy points. The Ravens enter the bye week banged up, but with a depleted defense, I expect Flacco to keep attacking threw the air to get early advantages on the scoreboard.

If you had a nice waiver wire selection following Week 3, you probably were very excited to add Lions running back Mikel Leshoure. Sure, Leshoure only took 26 carries in Week 3 turning that into 100 rushing yards and a touchdown. He pretty much solidified himself as the Lions primary running back in just one week, especially since Jahvid Best was out for the season. He looked like he could potentially be the best waiver pickup of the season. Then came his next three games which he totaled just 18 fantasy points combined. Check this out,my fantasy running backs are currently Jamaal Charles, DeMarco Murray, Shonn Greene, Felix Jones, and Mikel Leshoure. Charles was on bye, Murray was hurt, and I needed two backs to fill in for Week 7. I chose Felix Jones against the awful Panthers, and I regretfully picked Mikel Leshoure over Shonn Greene. Let’s just say Leshoure has dropped to the bottom of my depth chart. I don’t like his Week 8 matchup against Seattle, and I’m not crazy about him anywhere after that.

Don’t forget to check me out in Week 8 for another fantasy football bust report!