Dwayne Bowe Trade Rumors: Where Could He Land? 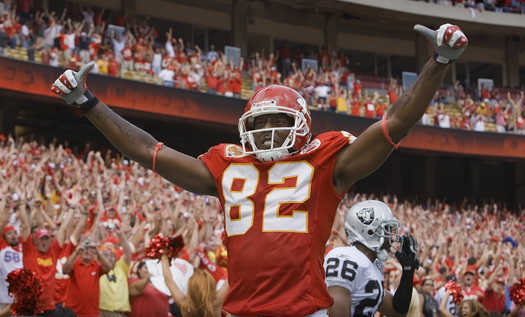 Bowe is heating up and gets the Bills in week 8.

Kansas City Chiefs wide receiver Dwayne Bowe is not happy on the Chiefs and he would like a new zip code to call home. Although mid-season deals are rare, landing Dwayne Bowe with a majority of your season would help a number of teams. Looking at the five most sensible landing spots for Bowe’s services, we would guess:

Brain Hartline and Devone Bess? Really? You think the Dolphins miss Brandon Marshall yet? (The answer to that situation was a GPS-ankle bracelet to make sure he didn’t go clubbing.) Ryan Tannehill is showing poise in his rookie season. Nothing adds poise like a stud wide receiver.

Stevie Johnson is nice but Bills fans drool at him being their WR2 and Bowe being Ryan Fitzpatrick’s main target. In a crowded division marked by mediocrity (and the Pats), if the Bills want to make a run, they may have no choice.

The Jets worked out former 3rd string QB Kevin O’Connell this week. With Sanchez, Tebow, and talented 2nd year QB Greg McIroy, why would the Jets even think about looking at another one? Could Tebow be on the move? Even Sanchez? We know the Chiefs need a QB. The Jets desperately need a top wide receiver, so they should at least make the call.

We don’t believe the Pats are realistic, so we won’t count them in our 10, but would you put it past Bill Belichick to trade for Bowe, just to keep him away from the Jets? They probably have 7 first- and second-round picks for next season squirrelled away anyway.

Sidney Rice is a nice target and his athleticism is rarely matched. Bowe would give rookie Russell Wilson another legit target and would decrease the pressure on him. The Seahawks are having a good season, but with the 49ers headlining an increasingly strong division, Bowe might be guy to take Seattle to serious division contention.

If Brandon Weeden can shine with Greg Little as his top receiver, imagine what he could to by targeting Dwayne Bowe 10 times a game? Despite their win last week, the Browns do not have much to look forward to this year. Don’t their fans at least deserve Dwayne Bowe – it’s pretty damn cold on the Lake you know.

Let’s face it , the 49ers are good. But where is the star in their passing game? Alex Smith is fine. Randy Moss is more a footnote than a threat. Frank Gore is not a dynamic pass threat out of the backfield. Mario Manningham is average at best. They demonstrated that they can come up small in a big spot last week. If they bolster their receiving corps, imagine how good Alex Smith can be.

The Colts are good. Not nearly very good, yet. Andrew Luck has great promise. The running game? Kinda eh. The Colts can streamline Luck’s learning curve by adding a monster like Bowe.

With Danny Amendola down (and injury prone), would you be comfortable with Brandon Gibson at WR1 and Steve Smith at WR2? Gibson may prove to be fine, but are you going to bank on that. The much-maligned Sam Bradford needs help, and it doesn’t seem things will get better on their own for the Rams.

Okay, they don’t really need Dwayne Bowe, but if their solution to Michael Vick continuing to play as if he were in the yard outside the jail is firing the defensive coordinator, why wouldn’t they make a play for Bowe?

We’re all trying to decide if Minnesota is for real (I say they already are), but if they add Bowe, that question becomes rhetorical? They can out-Brandon-Marshall the Bears and keep the Packers at arm’s length with the addition of Dwayne Bowe. Christian Ponder could do a Dan Marino impression throwing to that duo.

With the depth at WR in the NFL and the pass-first philosophy most teams have adopted, it’s hard to believe that at least 10 teams have a legitimate use for Dwayne Bowe. But, again, he’s an upgrade for most every team. And even if he isn’t he provides a dangerous 1-2 knockout punch if he lines up next to, say, Percy Harvin.

87 Responses to Dwayne Bowe Trade Rumors: Where Could He Land?