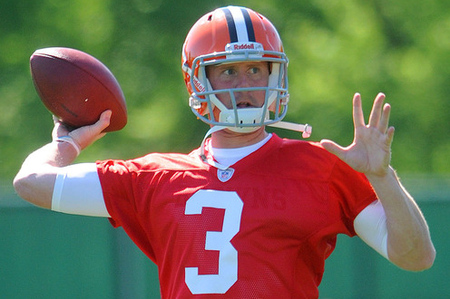 Is Weeden worth looking into some more?

We’re already six weeks into the 2012 regular season and with bye weeks and injuries forcing fantasy owners to make changes, it’s important to know who’s available on the waiver wire.

But if you’re in a super competitive league, there’s a chance that the top notch waiver wire priorities are long gone by now, and it’s important to be able to look deep into your leagues free agents to find impact players.

Here are some intriguing deep sleepers for Week 6 that are available in less than 10% of ESPN Standard Leagues.

This defense has scored 14 fantasy points in each of its last two match-ups against Arizona and Cincinnati both on the road.

Now, they get to come back home to face a St. Louis offense that is hardly a huge threat to put up big points. With their ability to get to the quarterback, I can see Miami’s defense sneaking into double digit points again this week.

Weeden has made his fair share of mistakes, but he is still fantasy relevant, having two 300+ yard games and another 291 yard performance in Week 5.

In Week 2 on the road against Cincinnati, Weeden torched the Cincinnati secondary for 322 yards and two touchdowns without throwing any interceptions. He registered 20 fantasy points.

Even with Leon Hall back in this match-up, he still is a good bet to throw at least one touchdown and go for over 250 yards this week.

Believe it or not, the Colts defense looked above average against a tough Green Bay passing attack. They definitely made Aaron Rodgers sweat a little bit, getting pressure on him and forcing an interception.

Mark Sanchez/Tim Tebow aren’t half the quarterbacks that Rodgers is, even combined. The Jets offense is absolutely dismal and I wouldn’t be surprised if the Colts got into double digits this week.

It’s hard to expect big things from any player that’s lining up against the 49ers defense, which is why we sat Jones a week ago.

But it’s ok to get him back in the lineup this week as we can expect Ryan Fitzpatrick to throw the ball heavily against the Cardinals. The Cardinals have struggled with #2 receivers as well, and that gives Jones a good opportunity to make a few plays.

Despite Brandon Weeden having a big game against the Bengals in Week 2, Josh Gordon only registered one catch for five yards.

This week, I expect him to put up better numbers, although I wouldn’t expect two touchdowns on two catches like he did a week ago against the Giants defense.

Gordon has a lot of potential yet to be tapped into and is a huge risk week in and week out, but he has a good opportunity this week.

I was a big fan of Powell’s rushing ability that he showed in the preseason, and I was ecstatic that he made the final roster.

With Beanie Wells and Ryan Williams out for a significant amount of time, LaRod Stephens-Howling, Powell and Alfonso Smith will split up carries.

I expect LSH to see the bulk of them, but wouldn’t put it past Ken Whisenhunt to utilize the versatile Powell more often that not.

Tate hasn’t caught a pass since Week 2, when he caught three of them for 71 yards and a touchdown.

The bad news is that Joe Haden is back and while he will be shadowing A.J. Green, it helps the Browns depth in the secondary, which is still quite weak.

With Matt Cassel (concussion) likely out against Tampa Bay, Quinn gets his first regular season action since he was with the Cleveland Browns in 2009.

Quinn has talented receivers in Kansas City like Dwayne Bowe, Steve Breaston and Jonathan Baldwin. But will he have time to throw, and can he make throws down field?

If 2009 is any indication, I’m not that optimistic, but he can’t be much worse than Mark Sanchez.

Kaepernick has two rushing touchdowns in the last two weeks, and is seeing a few snaps here and there with the 49ers wildcat package.

With Alex Smith having a potentially serious middle finger sprain on his throwing hand, it’ll be interesting to see if Kaepernick gets the start.

If so, it’d be his first career start which could come against the Giants who’s defense is hit or miss, especially against quarterbacks that can move out of the pocket.

Allen went from one reception in two weeks to nine in his last two match-ups.

He seems to be taking targets away from Coby Fleener and could do so again this week going up against a Jets defense that hasn’t fared too well against tight ends in 2012.