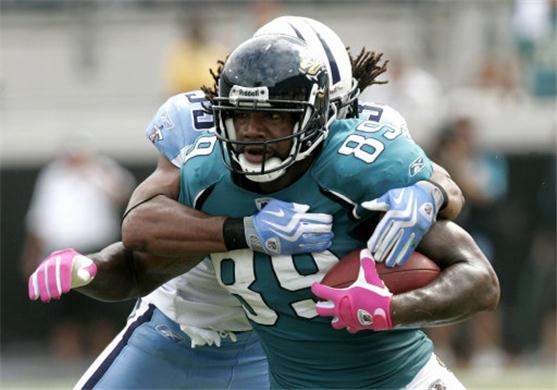 Fantasy football has just been a blast so far this year with all of the injuries, new starters, quarterback battles, and many more.

Of course, it does not feel like it should be Week 8 already, but we are almost halfway through the season which is exciting, yet also unfortunate.

Many of us just wish football could go on all year. Personally, I love the off-season thanks to the draft, so I’m indifferent.

Regardless, here are some deep fantasy football sleepers for Week 8.

Brown is the man behind Ryan Mathews for the time being, and will spell Mathews every few series.

I’m not confident that Brown will make many plays, but he’s still a strong back that could see a goal line score here and there.

Against a Browns defense that will be starting two rookies at defensive tackle, the Chargers could run all day.

Thanks to a foot injury that will keep prized rusher Maurice Jones-Drew out of the lineup, we may see the Jaguars resort to a few more pass plays going forward.

Not to mention, Blaine Gabbert is not 100%, which means that there is a small chance that Chad Henne could get the start, which would benefit Lewis as Henne enjoys throwing to tight ends quite a bit.

Lewis is not a bad tight end, unfortunately he just has had a case of the dropsies at times, which has led to his quarterbacks having less faith. Hence the reason he is a deep sleeper.

Brady Quinn looked very average, if not below average in his first start before the Kansas City bye two weeks ago.

The Raiders, on the other hand, are showing a knack for forcing turnovers lately, which means that they’ll be set on shutting down the Chiefs run game to force Brady to throw.

If they can make Quinn throw the ball a bit more, they could reap the benefits, as I see Kansas City struggling to get to 20 points as it is.

I’m fully expecting Trent Richardson to start, and play against the Chargers in Week 8. But that doesn’t mean that the Browns won’t take it a bit easier on him and have Hardesty spell him a bit more.

If that is the case, Hardesty could be the back to start out of the Cleveland back field. The only issue is that the Chargers rush defense ranks eighth according to FootballOutsiders.com.

I’m not expecting a very good game out of the Browns offensively here, which could limit Hardesty.

It has been Dreessen, not Jacob Tamme that has stepped up as the red zone tight end in Denver.

We know that Peyton Manning loves his tight ends, and he should have a big day as it is against a New Orleans Saints defense that is atrocious.

I’m starting almost every Broncos player I have offensively as they should be in for a good week.

We know that the New England defense has their faults, and are surely susceptible to the big play.

If Sam Bradford and the Rams can stay close in this one, Givens could be the beneficiary of a solid performance.

Sanders is usually good for two to four catches each game, but is actually a better down field threat than Pittsburgh seems to be giving him credit for.

The good news is that this game should have plenty of scoring in it, mostly from a passing perspective, which leads me to believe that Sanders could sneak a few more catches than usual this week.

The fact that the Pittsburgh rushing attack is still questionable despite Jonathan Dwyer’s Week 7 performance makes me believe that Big Ben and Co. could be in for a solid game.

DeMarco Murray has been ruled out officially once again, and Felix Jones has a bruised hand.

I doubt the hand bruise keeps Jones from starting, but he’s not guaranteed to get the majority of the touches if the coaching staff feels that it’s a big enough issue.

Tanner could be the beneficiary of a reasonable Flex week in deeper leagues if he see’s more than 10 touches against a Giants rush defense that leaves more to be desired.

Nasty Nate Burleson is out for the rest of the season, opening up the door for Ryan Broyles (and Titus Young) going forward.

Broyles was an elite play making receiver at Oklahoma before tearing his ACL halfway through his senior campaign.

The kid is loaded with potential and showed off some of it against the Bears in Week 7 having his first three catches on the season for 51 yards and his first career touchdown.

Until Chris Cooley can prove to me that he’s in game shape, I will actually give the edge to Paulsen at tight end for the Redskins.

After going five games without a reception, Paulsen blew up for four catches and 76 yards receiving.

We know that RGIII has not been shy towards tight ends, and Paulsen could have a solid week if he can hold Cooley from taking his spot.