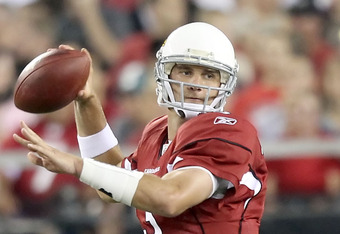 Anderson could put up solid numbers this week.

It’s never fun to have to make fantasy football decisions at times. When you have guys on bye weeks, and you are dealing with injuries, sometimes you just have no choice but to play a guy with a terrible matchup. On the flip side, there are times when you want to bench a stud with a poor matchup, and plug in a mediocre player who’s facing the worst defense in the league.

It’s up to you, ultimately to make that decision. But here at NFL Soup, we’re giving you some of the Highest Risk/Reward players for you to evaluate and ponder about as you prepare to set your fantasy football roster in Week 10.

I usually wouldn’t recommend starting David Garrard, but he’s a legit QB2, and QB1 option in deeper leagues for Week 10. The Houston Texans secondary has failed to stop almost every quarterback they’ve played, and Garrard is coming off a huge five touchdown performance against a struggling, but talented Cowboys defense. Garrard could have a two or three touchdown day. While he won’t get you 250+ yards, he should have no problem scoring.

Another guy I wouldn’t recommend starting on a regular basis, Anderson has one of the most favorable matchups in Week 10. Against a struggling Minnesota secondary, Anderson threw the ball effectively and did not turn it over, which is his biggest problem. With the Seahawks losing two of their defensive lineman, they will struggle to stop the run, which can open up the passing lanes for Arizona’s two talented wide receivers. Remember, Anderson still has Larry Fitzgerald to throw to. But this matchup could easily blow up in your face as Anderson is as turnover prone as they come.

It’s not 100% confirmed that Stanton will start in Week 10. But if he does, he could be a decent QB2 play. The Bills are scoring points offensively, but are losing games because they can’t stop anybody in the passing game. Stanton filled in reasonably well against the Giants in Week 6, and could be an excellent pick up for Week 10. He has a great arsenal of weapons that makes it hard for any QB not to succeed, but he could also lay an egg.

Sims-Walker may be the most inconsistent wide receiver in the league. He tends to have a touchdown every two games, and blows up for a nice game every once in awhile. But with a matchup like this, he may be worth the start in the Flex at the least. Sims-Walker could easily fall flat on his face, and Mike Thomas could steal the receptions, but it could be a risk worth taking this week.

Burleson has a touchdown in three of his last four games, including a very nice Week 9 in which he had 113 yards on seven catches and a touchdown. But with Matthew Stafford and Shaun Hill injured, he’ll have to rely on Drew Stanton. There’s a small chance Hill will play, and if that happens, we recommend Burleson. However, if Stanton plays, we’ll be hard pressed to start Burleson who could have a good game if Stanton gets protected.

Over the last two weeks, Turner has started to run effectively well for fantasy owners. He blew up in Week 9 for two touchdowns and 107 yards on 24 carries. However, while Baltimore hasn’t been great against the run, they’ve still only given up one 100 yard rusher this season, which was to Peyton Hillis. Turner could still have a big game, but Atlanta’s pass offense could take away some carries. Turner hasn’t been the most consistent back this year, either.

Crabtree only has one 100-yard performance this season. He’s been just about as mediocre as they come in 2010, but a big reason has been Alex Smith’s inability to get the ball to him down the field. While Troy Smith isn’t a great quarterback, he has a good arm, and has been syncing well with Crabtree in practices. Smith isn’t big in using his tight ends, so Vernon Davis’ stock takes a hit, and Crabtree’s could play into your favor.

Tom Brady has been slightly above average all season. But while he hasn’t been the top scorer you expected, at least he’s not hurting you only throwing four interceptions in two of his games. The Steelers have one of the top defenses in the league, and they will force Brady to make plays in the passing game. The Steelers secondary can be passed on, however, and Brady could have a solid game. The problem is that he’s only scored over 20 points twice this season, and this matchup sure doesn’t bode well for him to be as productive as you want either.

Starting Moss has a better chance to reward you this week, but he’s had a small decline in yardage the past two weeks. Donovan McNabb’s struggles can be attributed to this, as well as the slight emergence of Anthony Armstrong. The good news is that Washington will most likely have to air it out more to stay in the game, and the Eagles haven’t held receivers in check lately. But with McNabb’s inconsistency, this matchup could fail just as easily.

Austin owners are banging their heads on their desks right now with Tony Romo down. Austin has been held to under 40 yards for three of the last four weeks. Austin goes up against a top notch Giants pass defense which seems to be shutting everybody down. The potential is excellent, however, as Austin can make plays all over the field. But Kitna isn’t expected to have much time to throw, and it may be best to sit Austin in Week 10. After all, in his last matchup against the Giants, he was held to just 38 yards and three catches.