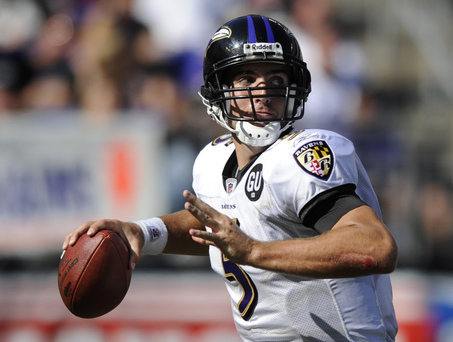 Flacco could use a deep threat at receiver.

The NFL in Week 3 was one of the most entertaining weeks in the league.

The Cowboys and Redskins Monday night game came down to the wire, and we watched as numerous teams pulled off upsets.

Darren McFadden was featured in our Week 3 Risk vs. Reward piece and shut me up quickly, however, Brandon Marshall, Cedric Benson, Jay Cutler among others proved just how tough their matchups were.

Hasselbeck has been on a small (and unexpected) tear with the Titans.

Unfortunately, he just lost his #1 wide receiver for the season, and the Titans can’t get anything to go on the ground.

The Browns secondary isn’t amazing, and can be passed on with ease at times, but Joe Haden against Nate Washington isn’t a favorable matchup.

Flacco got back on track in Week 3 against the Rams, but there is a significant drop in talent between the Jets and Rams defensive backfields.

Flacco has the talent around him, but with his ability to be turnover prone at times, I’m not 100% confident in him.

The risk here is based on the fact that Foster could easily re-injure that hamstring against a tough Pittsburgh defense, and the fact that the Steelers run defense is usually very solid.

Now, the Steelers have given up plenty of fantasy points this year, uncharacteristically, but it’s possible that they put it together to make Schaub beat them in the air.

Seattle’s run defense has been tough giving up just 3.1 yards per rush.

I fully expect Turner to get more carries in Week 4, but the play could be risky if Seattle’s run defense continues to be stingy to opposing running backs.

For the record, I’m not sitting Jackson this week as he’s finding ways to score for fantasy owners.

But the Cincinnati run defense is giving up just 2.9 yards per rush, tied for #1 in run defense along with the San Francisco 49ers.

Jackson is a threat to make plays out of the backfield as well, however.

Nasty Nate Washington has been a solid Flex option, but now he will be the new #1 receiver replacing Kenny Britt.

We’ll soon find out just how much of Washington’s success was courtesy of Britt being doubled up at times.

Washington also has to face Joe Haden, which hasn’t fared well for receivers so far in 2011.

Houston’s secondary has improved, and while they are still prone to big plays, they are putting pressure on the QB and forcing bad decisions.

Big Ben struggled on Sunday night with all the pressure the Colts had on him.

Wallace seems to make a big play nearly every game, but this one could be different.

Smith owners were disappointed in Week 3 when Cam Newton and the Panthers struggled heavily against the weak Jaguars defense.

Smith’s stock is gauged on how well Newton performs, and Chicago will be bringing the pressure against Cam Newton.

Be cautious with Smith as he could be hit or miss for the rest of 2011.

With Gates a possibility to sit out, Randy McMichael steps in.

In 2010, McMichael filled in well for the All-Pro tight end, but whether or not McMichael will see heavy targets is based on just how well the Chargers offense plays.

The Dolphins are quite poor against tight ends so the matchup is favorable, but Philip Rivers struggled quite a bit against the Chiefs in Week 3.

The injuries to the Giants defense have clearly hurt their fantasy value, but they will likely get to face a Beanie Wells who’s not 100%.

The Giants should be able to force Kolb to beat them in the air, and Kolb certainly could do that.

I may pass on the Giants defense this week.