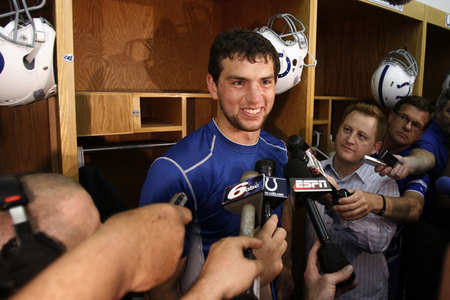 Can we even really call Luck a rookie anymore?

Week one of high risk vs high reward was a bit disappointing. The Buffalo Bills defense gave up 48 points to the New York Jets offense, while Robert Turbin and Kendall Wright both did next to nothing.

I was optimistic with Turbin and still say he would have been a fine play had Marshawn Lynch not been ready to go, but Wright did not step up despite the absence of Kenny Britt.

Regardless, here are the top high risk/reward options for week two.

Luck really had a tough opening day against Chicago where he threw three interceptions and fumbled once. But he still completed 23 passes for 309 yards as well.

Indianapolis faces a secondary in Minnesota that is quite bad, and lacks overall depth. I see Luck having a double digit game, around 15-17 points this week.

With the way that the Bills defense played in week one against a less than exciting Jets offense, I can’t help but wonder if Matt Cassel can do the same.

Cassel has receivers that can make plays like Dwayne Bowe, Dexter McCluster, Jamaal Charles out of the backfield, Steve Breaston and Jon Baldwin. He also has tight ends that can catch consistently as well in Kevin Boss and Tony Moeaki.

I wouldn’t be surprised to see Cassel go off this week.

Stewart practiced on Friday and should play against the Saints on Sunday. Only issue is that he may not get the start or a ton of carries.

However, if he does, it could pay off, especially against a defense that gave up 96 yards and two touchdowns to rookie Alfred Morris one week ago.

Despite the solid play of the Cleveland Browns defense on Sunday, they still gave up 110 yards to LeSean McCoy on just 20 carries.

The Law Firm is a far cry from McCoy, but he does have goal line ability and he ran very well against a tough Baltimore Ravens defense on Monday Night.

Tennessee’s secondary took a big hit after losing Cortland Finnegan to the Rams in the off-season. Robert Meachem can stretch the field and makes big plays, and has a quarterback in Philip Rivers that can sling it.

Meachem may not see a ton of receptions, but it only takes two or three to make him productive as a Flex receiver.

Some believe Britt will be limited against the Chargers, as his knee is not quite 100%. But he still could be worth a play in deeper leagues if you’re hurting for talent at the receiver position.

Britt is a play maker and has a quarterback in Jake Locker that can extend plays with his feet and find receivers down field. We’ll see if Britt gets the playing time, but it’s a situation that can reward fantasy owners if he does.

Those in PPR leagues should definitely give Bess a look most weeks, but even in standard leagues he has value. He is arguably the best receiver on the field for the Dolphins and Ryan Tannehill has to throw to somebody.

The back field is a bit banged up, and the Dolphins very well could be playing from behind, so seeing Bess catch five to seven passes could be a smart Flex play this week.

Housler only played in six snaps in week one, but with Kevin Kolb being a tight end loving quarterback, I wouldn’t be surprised if Housler saw more playing time than Jeff King this week.

Housler is an impact tight end waiting to happen, and just needs to get opportunities. If he sees the field with Kolb, he could put up decent TE2 numbers.

There’s no doubt in my mind that Christian Ponder will be looking Rudolph’s way a few more times than usual. The linebackers in Indianapolis are a bit unproven in coverage and Rudolph has a match-up advantage.

With both of these defenses struggling, Rudolph could be impacted with a shootout on Sunday.

The Redskins may end up being legit offensively with RGIII throwing the football, but they have pass rushers on defense that force opposing quarterbacks to make bad decisions.

Sam Bradford and the Rams offense is quite unproven, and they could be shut down if Washington comes ready to play.