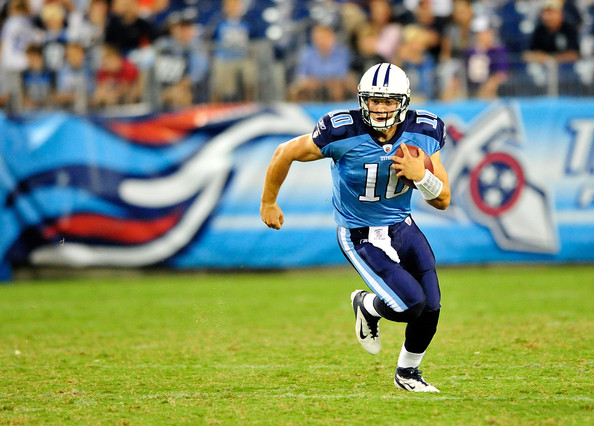 There are some tougher overall match-ups and more risks to take this week, and it couldn’t come at a worse time: The Playoffs.

But don’t fret, as NFLSoup has you covered to help you win your league.

Here are 10 high risk vs. high reward starts to consider in your Week 15 match-ups:

Word on the street is that Locker could get the start in place of the less than 100% Matt Hasselbeck.

Why not right? The Titans aren’t in the hunt for the division title anymore, and have a rookie quarterback who has had significant playing time in two games and has played very well.

In a short time against Atlanta he scored 14 fantasy points, and he came in relief of Hasselbeck in Week 14 against New Orleans and put up 24 fantasy points.

This week he gets the lowly Colts. This could yield big points.

Yates has put together two very respectable weeks and has been very impressive.

Carolina’s defense as a whole is below average and while I think Arian Foster and Ben Tate have big performances, it’s not out of the question for Yates to make a few nice plays.

The only issue is that he may not have to throw the ball a whole lot unless Cam Newton can keep Houston in the game.

Newton has a tough match-up this week against a much improved Houston Texans defense.

Against a similar defense in Tennessee four weeks back he was held to just 11 fantasy points, and has only thrown for four touchdowns in his last five performances.

There could be a few better starts this week than Newton, although the guy that likely got you to the playoffs would be very hard to sit.

Wells has been playing with a bum knee and playing on an offense that generally struggles to move the ball doesn’t help.

Cleveland’s run defense isn’t very impressive, however, and Wells could have a very solid performance if John Skelton can move the ball well.

Against the #1 run defense in San Francisco Wells was shut down, but that was to be expected. Look for a rebound here.

Greene from a slew of mediocre, single-digit performances to having two consecutive 20+ fantasy point performances.

The Jets offense has been moving the ball well in recent weeks, and Greene looks to continue this week against a weak Eagles run defense.

Mark Sanchez will likely struggle this week, so expect another 20+ carries from Greene, although he’s not guaranteed anything being a mediocre running back, still.

Jones gets his starting position back with DeMarco Murray placed on the IR prior to Week 15.

He was resurgent against the Giants on Sunday after rushing just 16 times for 106 yards on the ground.

Tampa Bay’s defense has been quite disappointing with the youth movement, and this is a solid match-up for Jones.

Larry Fitzgerald will be matched up on Joe Haden, but even Haden has regressed in this disappointing Browns season.

Doucet will likely pull a match-up against Sheldon Brown and while Brown has been a disappointment, Doucet has been showing that he has fantasy stuff.

Look for John Skelton to throw the ball well enough for the Cardinals to win, with Doucet getting a solid number for your Flex position.

Big Ben’s ankle is going to slow him down slightly this week, but it won’t keep him from playing at a high level.

That will be the San Francisco defense that will likely work to shut down Ben and the offense.

With the Steelers running game already struggling, look for Brown and Co. to see a lot of targets, but it could be a down week if the 49ers get a lot of pressure on Ben.

This could be a low scoring game.

So long as Jay Cutler and Matt Forte are out of the Bears’ lineup, it’s hard to believe that they will put up big points.

The Seahawks are coming off of a solid performance against the lowly Rams, and the Bears offense isn’t that much better.

Look for this sleeper defense to put up decent numbers despite playing on the road in the Windy City.

The Falcons defense has been inconsistent in 2011, but they have a solid match-up against Blaine Gabbert this week.

They’ve been solid against the run for much of the season and should be able to contain Maurice Jones-Drew, however you can’t expect a shutout.

Playing at home will help this match-up, and I expect Atlanta to keep Jacksonville under 17 points and force a few turnovers.