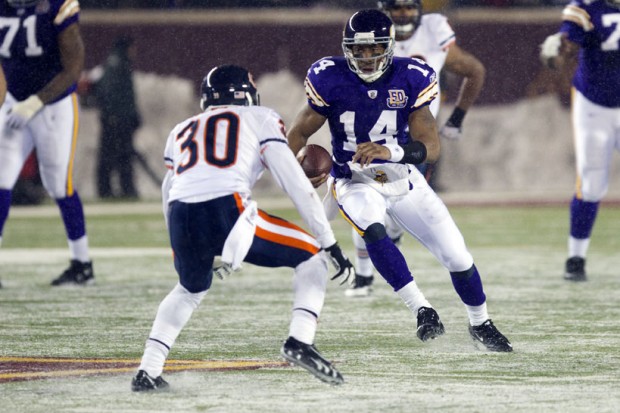 We are entering the last week of the 2011 NFL regular season. Most fantasy football leagues are finished, but there are still a few leagues out there finishing up.

Teams like Green Bay, Detroit and Houston are likely to rest some players, so you have to be cautious if you have players like Calvin Johnson, Aaron Rodgers, Matthew Stafford and Arian Foster.

Instead, some back up players like Matt Flynn could be worth a look, although may be a bit risky in the championship game.

Here are some of the biggest risks to take in Week 17 that also have big time reward potential:

Webb has scored 41 fantasy points combined in two of his last three games.

He’s done it while throwing very few passes and coming in later in games in relief of Christian Ponder.

With the Vikes season over, they’ll likely give Ponder (concussion) some rest and see what Joe Webb can do.

He gets touchdowns on the ground and rushing yards as well as some passing yardage.

Flynn could see 3+ quarters against the Lions mediocre secondary. The Lions also may rest some starters as well, helping the match-up a bit more.

I fully expect Green Bay to run the ball frequently, but I only see Aaron Rodgers getting 15-20 snaps on Sunday.

Flynn could be a solid QB2 this week.

Fitzpatrick has been quite poor since signing his contract extension.

But this match-up against a weak Patriots defense is quite favorable and Fitz could have a big week, especially from a yardage standpoint.

The Patriots won’t be backing down this week, and the Bills should still be going full force.

With Adrian Peterson done with a torn MCL and ACL, Gerhart gets the match-up against Chicago. He’s been productive in AP’s absence, but the match-up isn’t exactly favorable.

I fully expect Arian Foster and many other Houston Texans to rest on Sunday against the Titans.

Ben Tate has shown that he can handle a load, and he should see the bulk of the carries for the Texans.

Look for T.J. Yates to hand the ball off quite a bit as well.

Ridley has been a Flex worthy running back in his last few weeks, and has a very favorable match-up this week.

Buffalo’s rush defense is one of the worst in the NFL, and Ridley should get 15-20 touches and flirt with 80 yards.

I expect him to be a solid Flex play this week.

Vincent Jackson likely will sit with his groin injury, which opens up the door for Floyd to see a few more targets.

Whether Philip Rivers and the Chargers go full force against the Raiders is yet to be determined, but an AFC West rivalry and opportunity to spoil the Raiders playoff chances are on the line.

Floyd could quietly have a productive Week 17.

Branch will see plenty of targets from Tom Brady this week in a must-win game in the AFC East.

Expect Brady to throw the ball quite a bit early on, with Branch getting involved heavily.

I’m not expecting a huge game from Branch, but certainly a touchdown and 50-60 yards is reasonable.

Risky defense for this week in the Titans, who face a Texans offense that likely will be resting studs like Arian Foster.

The Titans defense seems to have given up in recent weeks, but they could finish off on a strong note, and are somehow still an option to make the playoffs with a win.

That is, of course, if about four-five other scenarios happen in their favor, which is unlikely.

If Matt Flynn plays the majority of the game, I expect the Lions to have a reasonable fantasy performance.