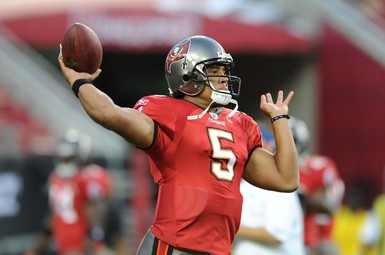 Can Freeman and the Bucs improve upon their surprising 2010 season?

Last week we made a killing in our Start/Sit calls, as Timmy “Teebs” Tebow mopped the floor with the Raiders, and four of our five sit calls lived up to our educated guess.

Another week of start/sit calls is upon us, and it’s also the start of Thursday Night Football. Week 10 is here and about to take over, so get ready by checking out five guys we love and give guys we hate for the week:

I know I had ‘Teebs’ in the start column last week, but with all the naysayers out there, I thought some of you Tebow owners would need someone to push you in the right direction and let you know it’s okay to use the guy. The Chiefs just got blasted for 31 points against the winless Dolphins, so I like his chances this week.

Just about every time I say “this is the week” for Johnson, he comes up lame. But against Carolina’s porous run defense, I really think he could finally break some big runs. He showed some life last week against a tough Bengals run defense, so there’s hope for him in week 10.

Wells could be in for a huge game against a very weak Eagles run defense this week. The Eagles were getting burned by DeMarco Murray before the Cowboys fell behind in week nine, and they got burned again by Matt Forte in week 10. As long as the Cards are smart and run the ball, Wells should be in for solid numbers.

Manningham scored last week and could be in for a big role again with Hakeem Nicks ailing. Even if Nicks returns, Manningham could be pretty busy against a beatable 49ers pass defense, as the Giants will find it very difficult to run on San Francisco’s tough run defense.

Harvin is due for a breakout game, and there’s a good chance he finds it against a vulnerable Packers pass defense. He and Christian Ponder have displayed solid chemistry in spurts, and Harvin is likely fully healthy after resting on a bye in week 10.

I don’t really trust Freeman much these days no matter the matchup, but with the way Houston is playing defense, I wouldn’t use him against the Texans.

Mendy has had one elite outing all season, so don’t bank on him going off all of a sudden against a very tough Bengals run defense.

The Giants face a 49ers run defense that hasn’t allowed a rushing touchdown all season, so no matter which guy you wanted to use, you’d be wise to look elsewhere for running back help this week.

Bowe is usually a pretty solid play, but matching up with shutdown corner Champ Bailey in week 10 doesn’t bode well for him. KC was awful on offense last week, too, so their inconsistency alone should scare you off.

Fitzgerald scored with John Skelton under center in week 10, but I’m not buying his prospects against Philly’s tough corners. He could still be solid, but you could do a lot better this week.