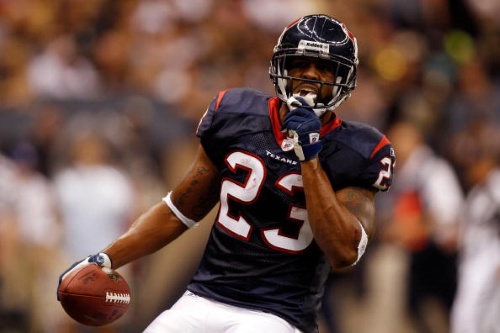 Arian Foster and the Texans are number one going into week 9.

I’m back to make my start and sit calls for the second week in a row while our usual Start and Sit guru Wayne Makela is on vacation. Last week I nailed four of my five start calls, with the odd man out being a disappointing Cadillac Williams.

My sit calls had me getting three losses with Eli Manning, Dwyane Bowe, and Shonn Green putting in solid efforts, which brought my start/sit record to 6-4 on the week.

Obviously Newton is a hot item right now, but I’m not suggesting a start here because of his 400+ yard games. It’s unlikely he’ll have an insane yardage game like that for the third week in a row to start his career. However, he’s facing a Jaguars defense that stop the run better than the pass, and has seen Matt Hasselbeck and Mark Sanchez throw two scores in the past two weeks. I think Newton is in for his third straight solid effort with a nice matchup.

Miami’s rookie back that was formerly unimpressive is suddenly impressive and on the rise after a solid 100+ rushing day in Week Two. He faces the Browns this week, who were carved up by Cedric Benson to start the season. If you’re hurting at running back (Foster, S-Jax, Moreno), Thomas could be a solid play this week.

Arian Foster continues to struggle with his hamstring issue, and Ben Tate has rushed for at least 100 yards in each game to start the season during that process. I don’t think that necesarrily continues, but his role suggests he’s going to continue producing in that offense. Houston has a balanced attack and the impressive Tate should continue to lead the charge until Foster works his way back to full strength.

Green showed how beastly he can be with a 10-catch, 100+ yard and one-touchdown performance last week. I like his chances this week as the Bengals will have to do most of their offensive work through the air against the solid 49ers run defense. Considering the 49ers got torched for over 400+ passing yards last week, you have to like his chances even more.

I don’t think the Broncos will pass much going forward, but I do think that when they do that Decker is going to be a big part of the offense. He went off for 113 yards and two scores off of five catches last week, and should have a nice role with Eddie Royal out for a few weeks and Brandon Lloyd nursing an injury. Don’t expect fireworks, but he can be played as a solid WR3 with some upside.

I think Chandler’s value is starting to look like it’s for real after scoring three touchdowns in the first two weeks. He’s not always going to see a ton of targets, but he’s a beast in the red-zone and could see more targets in what could be a shootout against the Patriots this week.

Denver is dealing with a slew of injuries right now and Orton gets a seemingly unfriendly matchup with the Titans (so far) solid pass defense. Denver has also re-committed itself to running the ball, so Orton isn’t a lock to be throwing a ton of balls going forward. I think this week is a good week to keep him on your bench.

Your first-round pick has clearly been a major disappointment out of the gates. Even if Foster plays this week, he’s not fully healthy and the Texans have named Ben Tate the starter for the short-term. Foster just can’t be trusted right now.

Not the toughest of calls, but Lynch gets a spot in my Sit list because I know some people are hoping for a bit of a breakout game with an easier matchup than last week’s game with the Steelers. Don’t count on it. Lynch is sluggish and operating behind a weak offensive line. He needs to be free-falling down your running back rankings.

Harvin has only been playing about half the team’s offensive snaps early in the year, and it’s been no secret that the Vikings passing offense has been slow to get going. I don’t love Harvin going forward, and I don’t like his matchup with the stifling Detroit Lions defense, either.

Hopefully the second time will be the charm for sitting Bowe. I’ll take the lashing from readers if he puts up good numbers again this week, but I just don’t see it. That KC offense is abysmal and will only be worse without Jamaal Charles. The matchup with a solid San Diego Chargers defense doesn’t bode well, either.

I can’t stop hating on Seattle receiving options as long as Tarvaris Jackson is under center. They could get things going a bit if Sidney Rice makes it back this week, but Miller is still one of those potential-ridden guys that is going to be held back by his quarterback.