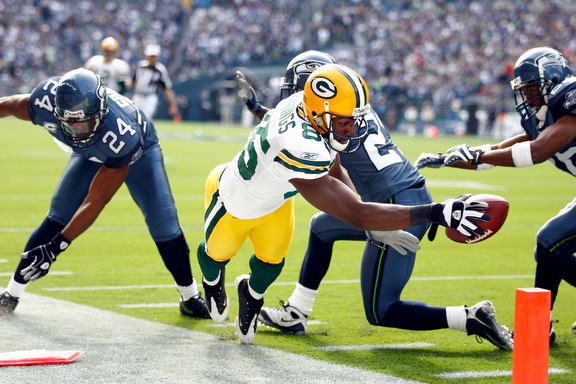 This could be the week Jennings finally breaks out.

A few big trades have given us some questions that need answering. Who will be the featured back in Seattle? Can Randy Moss re-capture his Minnesota glory years? That, and we all are left to wonder whether or not Terrell Owens is truly back, if Peyton Hillis can continue to be trusted as a RB2, and if Matt Forte will ever run for 100 yards again.

So many questions, so little time during the week. We make our best effort with the Start/Sit column this week, giving you four guys to try, and four to ride the pine:

Hill had a career game in Green Bay last week, and should continue to produce against the Rams this week.  Expect this to be a high scoring game in the 30s.

Most years Greg Jennings would be an automatic start every week. This year he is averaging only 4 catches per week for 40 yards. Expect some big plays against Washington’s secondary on Sunday.

Cincinnati has emerged into a pass first team, and seem to have forgotten about the back that basically propelled them into the postseason last year. Against Tampa, expect a lot more touches going his way.

Celek finally caught his first TD of the year last year. Celek and Kevin Kolb seem to have nice chemistry together, unlike Celek and Vick. If Kolb is QB, expect at least a decent fantasy day from the TE.

Orton has been a nice fantasy option this year, despite not having Brandon Marshall. Look for the Ravens’ #1 pass defense to stifle the Broncs’ pass attack.

A Monday night game in New York usually means gusty winds, so expect this to be a ground war. Moss is just getting back into the groove in Minnesota, and with a QB who has never thrown to him, don’t expect the world in his first game back in purple.

Indy will be playing extremely hard after a tough loss to Jacksonville last week. Expect them to score early and often, forcing Kansas City into an almost pass only offense most of the second half.

Witten doesn’t seem to be the target player for Romo anymore. With Miles Austin’s emergence and Roy Williams rebounding his career, Witten may struggle fantasy-wise all year.