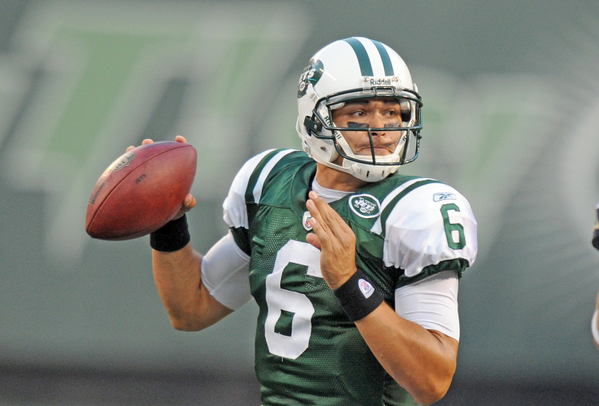 Sanchez may need a new weapon or two.

We don’t have to go far in the dissection of last week’s Start/Sit piece to know I bombed. I mean, really bombed. It was the kind of expert-advice-implosion that you only read about.

You know, the kind where I suggest playing Josh Freeman (no touchdowns), and not playing Ben Roethlisberger (five touchdowns). See? Seriously, that’s as far as we need to go.

Needless to say, I’m out to make-up for that gigantic gaffe. Week six will be much better. Check out who to start and who needs to ride your bench this week:

The Jets and Sanchez are better than this. Maybe not leaps and bounds better, but they’re not this bad; this average. Sanchez and the Jets need to get going, and drawing the weak Miami Dolphins pass defense can only aid their cause. Sanchez was a top-five fantasy passer just a couple weeks ago, and I think there’s a chance he can get somewhat close to that again – if only for this one week.

A lot of people are skeptical of Hillis’ value right now. With all this trade/contract/Montario Hardesty talk, I can’t blame them. However, all of that negativity could be out the window after Hillis rolls over the Oakland Raiders weak run defense this week. I think Hillis takes out his anger in a big game this week, so he needs to be in starting lineups.

LeGarrette Blount is out, and word on the street says Graham will get the bulk of the load out of the back-field this week. Add in his role as a receiver, and Graham could be offering solid production this week. The Saints can definitely be run on, too, so it looks like he has some solid value this week.

It seems Burress is an expected sleeper every week, but he doesn’t ever quite live up to that billing. However, with Derrick Mason gone and the porous Dolphins pass defense on the docket, I like his chances this week. He should at least be ready to offer nice WR3 numbers, with potential for much more.

We know the Pats’ offense is sick when all their guys are healthy, and after making it back last week, it looks like Hernandez has a pretty good chance at getting more involved. He gets a pretty beatable Cowboys pass defense, so I think he has a solid game this week.

I know Manning could potentially pull a Ben Roethlisberger on all of us this week and go off against a Buffalo Bills pass defense that is pretty flexible. However, I’m not so sure his yardage and potential handful of scores won’t come without a few mistakes. This Buffalo secondary (and defense, overall) does a great job forcing turnovers, and has picked off four passes in a single game two different times this year. And they did it against Tom Brady and Michael Vick. Considering Manning led the league with 25 picks in 2010, he’s a candidate to leave on the bench this week.

If you’re down to choosing between S-Jax and a bunch of second or third tier guys like Jonathan Stewart, Pierre Thomas, or Michael Bush, save yourself the time and stress and stick with the dude with the dreads. He’s got a great role and he’s still explosive. However, if you have a solid option that could take his place, let him ride your bench for a week. Chances are the Rams gets down early on the road against the Packers, which would means Jackson’s value should be severely curbed this week.

I know Best got going a bit last week and broke a ridiculous 88-yard touchdown run. That was awesome, but outside of that, he has done very little as a runner all season. This week shouldn’t see him being overly explosive in the ground game, as he draws a very stiff 49ers run defense. Not a little stiff; very stiff. That crew hasn’t allowed a single rushing touchdown all year.

I love Marshall, but there is an ugly equation brewing in Miami right now. Matt Moore + Jets elite corners + already disappointing overall numbers = another disappointing week for Marshall owners. He could still be serviceable this week, but the odds are against him busting out and being the guy you hoped he’d be when you drafted him as your WR1 or WR2.

Clark just isn’t getting it done and isn’t reliable anymore. Until he gets it together and develops some chemistry with Curtis Painter, he’s got to be left on your bench.