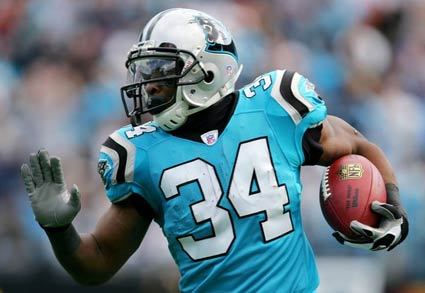 Last week I suggested you play Tim Tebow and Fred Davis, and those guys panned out quite well. Daniel Thomas, Jackie Battle, and Percy Harvin, well, not so much. However, I made up for my start misses with some solid sit calls, as I suggested to stay away from Philip Rivers, Peyton Hillis (before he was ruled out), Vincent Jackson, and Reggie Wayne. Maurice Jones-Drew was a push, as he had 100+ yards, but didn’t score and fumbled.

Overall, week seven had me at 6-3-1. Not bad, but I’m still aiming for at least seven correct calls a week. Let’s check out week eight’s Start/Sit calls:

Flacco was horrid last week against the Jaguars, so he needs to make it up to fantasy owners (and to his team) with a big game this week. Luckily, he gets the weak Cardinals defense, and he should have no trouble bouncing back in week eight.

Some are hyping up Darren Sproles with Mark Ingram likely out, but it’s Thomas who will get the early down and goal-line work. Sproles is obviously more explosive and will be active in the passing game, but Thomas will start and have the bigger overall role. Oh, and he faces the Rams.

I’m not ranking Hillis overly high this week, as he has a brutal matchup against the 49ers (who have yet to allow a rushing touchdown), however, IF (check his status) he plays, I have a weird gut feeling that he’ll actually have a pretty darn good day. You know, one of those “I want to get paid and don’t want to lose my starting gig” kind of days. Just make sure the guy is playing. If he’s not, this start call is clearly void.

Marshall needs to score a damn touchdown. Am I right? He’s been hit or miss all year, and the week you do sit him, he still puts up six catches and 100+ yards with Darrelle Revis on him. Miami won’t win this game, but Marshall will get his against a still banged-up Giants secondary.

With Champ Bailey on Megatron all day, you have to think Matthew Stafford hooks up with someone else quite a bit against the rest of Denver’s weak defense. Burleson could be that guy. I know he’s a risky, but Stafford will have to utilize him this week. He should post solid WR3 numbers.

I know a desperate Kolb owner may be thinking that “he’ll have to pass a lot in this one” or “he’s due”, but neither excuses are good enough to play this guy right now. He’s been unreliable for at least four straight weeks and draws the Ravens this week. Pass.

I know I should be excited for his fantasy prospects with the combination of Tim Hightower going down and the Redskins facing the Bills this week, but I’m not enthused. Torain has been slow and plain old weak the past two games, and I think Roy Helu is about to swoop in. Besides, you just never know what to expect with Mike Shanahan calling the shots.

He’s at home so there’s a chance, but the Vikes generally put the clamps on the ground game. D-Will has been out-played for most of the year by Jonathan Stewart anyways, so take a break from him this week if you have a decent fill-in option.

The Saints are using less three-wide sets and Moore has just 13 catches and no scores in his past four contests. I know, the week I tell you to sit Moore he’ll go off for three touchdowns against the Rams, but in all seriousness, you can’t bank on that. He’s been invisible and you’ll have to assume he stays that way for another week.

Wayne hasn’t scored or topped 80 yards since the first game of the season. Your WR1 is barely holding onto WR3 status, and needs to be traded at this point. You’re probably stuck with him, however, but that doesn’t mean you have to grin and bear it with him in your lineup. Sit him until he gets going again (if ever).