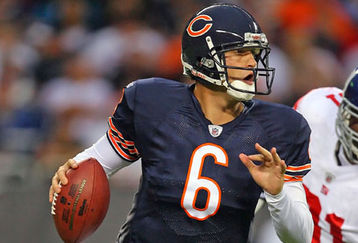 Can Cutler be on top of his game against the Packers?

Week eight was one to forget, as some pretty unlikely outcomes played into some unspectacular fantasy performances. Just about all of my start calls were busts, while only one of my sit calls (Lance Moore) made me look like a fool. And this was the same Lance Moore who had done nothing for four straight weeks. Again, guys are just crazy out there.

It’s time to get back on track, so let’s take a look at who you should start or sit heading into week nine:

Tebow knows he hasn’t played well. He doesn’t need everyone telling him that. But as bad as he’s been, he’s still not without talent, and one solid game could help turn things around. The Raiders aren’t too formidable, and he had success against them last year, so I think he bounces back with solid numbers and quiets the critics for at least one week.

Green-Ellis is still the guy to start out of the Patriots back-field, and seeing how Reggie Bush topped 100 yards on the ground against the Giants last week, you have to like his chances to have a solid outing in week nine.

Battle hasn’t matched his 119 yards from a few weeks back, but he’s still toted the ball 35 times the past two games, and has managed to top 70 yards rushing in both of them. He’s a lock to get the bulk of the rushing load for the fourth straight contest, and should be a quality play against a weak Miami defense.

With Tarvaris Jackson back under center mid-way through last week’s contest, Rice finally looked like a fantasy weapon again. He finished the week with seven grabs and over 100 yards, showing once again that he has some nice value as long as Jackson is healthy. If T-Jax suits up in week nine (and he should), Rice should post solid numbers against a beatable Cowboys pass defense.

Crabtree is coming on strong, and looks to be turning the corner, as he has reeled in at least five receptions in three of his last four games. Now that deep-threat Braylon Edwards is back in the lineup, Crabtree’s role as a possession receiver should only grow.

Cutler has played pretty well lately, but this Eagles defense he’s facing in week nine has really turned it up a notch. I sense some turnovers coming this week.

I don’t need to really put CJ2k here, but what some fantasy owners do need to know is that you’re wasting  your time “hoping” for him to breakout. Something isn’t right with him and/or the Titans ground game, and facing a tough Bengals run defense isn’t going to help it magically get better.

Thomas is a solid back, but he’s been battling injuries and Reggie Bush stepped it up last week. The Chiefs are really rising to the occasion lately on defense, as well, so if Thomas plays this week, I’d try another option.

Johnson is a very solid and stable WR2 with WR1 potential at times, but he’s facing Darrelle Revis this week. Enough said.

DHB has been awesome, putting up 80+ yards in four straight games. I’m buying into the notion that he’s turning into a legit NFL wide receiver, but I’m not sold on his streak of solid efforts continuing against Champ Bailey this week.