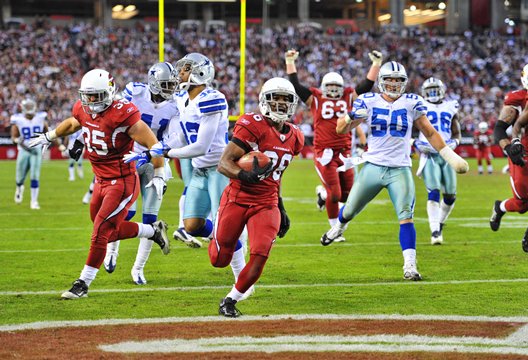 With another week of fantasy football wrapping up, we still manage to be surprised on a weekly basis.

Whether a player surprises us, or a team, the NFL proves just why games aren’t played on paper.

Not many would have predicted the Texans blowing out the Ravens 43-13, or that the Packers, Patriots and Saints all had their defensive struggles against above average offenses.

Johnson, and #9 on this list Josh Freeman were both featured in my High Risk vs. High Reward piece earlier in the week, and they seemed to reward fantasy owners pretty heavily this week.

CJ2k currently is the #1 fantasy performer this week in all leagues, prior to Monday’s match-up with Detroit and Chicago.

Johnson rushed 18 times for 195 yards and two touchdowns, one of which was an 83 yard scamper late in the first quarter. It’s good to see that he may be back.

As of now Freeman is third overall in fantasy scoring for Week 7, having a monster game against a very poor New Orleans Saints defense that got Jonathan Vilma back.

Freeman completed 24 of 42 passes for a whopping 420 yards and three touchdowns, finishing with 28 fantasy points this week.

Unfortunately, it was in a losing effort as he was outplayed by Drew Brees who threw four touchdowns himself. It’s good to see Freeman with back to back big games after coming off of a three touchdown and 23 point fantasy performance in Week 6.

I had a feeling about Morgan this week, even though he doesn’t see a ton of targets from Drew Brees.

Against such a poor secondary, I asked owners to take a risk on him this week and he delivered with 10 points after catching a 48 yard touchdown pass.

Morgan isn’t an every week starter, but in match-ups like this, it’s almost crucial to get him in the Flex, especially in deeper leagues.

I’m only putting Cobb on this list because it seems like nobody has faith in the guy in regards to fantasy. This is his third consecutive double digit performance since Greg Jennings has been out, and despite James Jones hogging touchdowns in previous games, Cobb added a couple himself this time around.

Cobb finished with eight catches for 89 yards and two touchdowns, giving him three touchdowns on the season. His receptions have been seven, four, seven and eight in his last four performances and is becoming a staple to the Green Bay Packers offense.

Clark has not scored a touchdown since Week 6 of the 2011 regular season, and went from being a high profile tight end, to a potential journeyman.

Thanks to Josh Freeman, Clark got a few more looks this week after catching a season high five passes for 51 yards and a touchdown.

Sure it was just 11 fantasy points, but that’s almost double what he had in the first five games prior.

The Titans took six weeks to score a rushing touchdown after getting one in on the Titans in Week 6.

It was Harper and not Chris Johnson who recorded it as well, and it looks like Harper is the goal line go-to guy going forward as he added two more in this one.

Harper carried the ball just seven times for eight yards, but his two touchdowns still recorded 12 fantasy points as we start to see Harper as the new Mike Tolbert.

It’s good to see Dustin Keller back after missing four games after sustaining a hamstring injury in Week 1′s blow out victory over the Buffalo Bills.

Jeff Cumberland started to take over, but left early in the game, leaving Keller to be the go-to tight end for Mark Sanchez.

16.8% of fantasy owners were likely reluctant to start Keller, but those who did were rewarded with 15 points after he caught seven passes for 93 yards and a touchdown.

With Santonio Holmes out for the season, and Jeff Cumberland hurting, Keller should be a fringe TE1 going forward.

Moss is aging and isn’t the same receiver he once was, but he can still come out and make a few plays. He caught two passes for 80 yards against the Falcons two weeks ago, but has been off the radar in terms of fantasy for most of the season.

Week 7 offered up just three receptions for the veteran, but he turned two of them into touchdowns, totaling 67 total yards and 16 fantasy points.

With Robert Griffin’s ability to throw the ball down field, Moss is a deeper league Flex that should be looked at on match by match basis.

We haven’t heard a thing from Rashad Jennings since Maurice Jones-Drew ended his holdout right before the start of the season.

Jennings is a very talented back, but there’s no need to rush him more than a few times when you have MJD.

However, Jones-Drew left the game early with a walking boot on his foot, as Jennings took over rushing 21 times for 44 yards and a touchdown.

While he didn’t rush particularly well, he also added seven receptions for 58 yards, giving him 15 points for the day. We’ll keep you updated to the extent of MJD’s injury as Jennings could be a hot add this week in the waiver wire.

With both Beanie Wells and Ryan Williams out for extended periods of time, somebody else has to step up for the Cardinals at running back.

The depth chart reads that LSH was #1 with William Powell backing him up, but Week 6 suggested that perhaps Powell was the go-to guy after rushing 13 times for 70 yards.

His rushing touchdown took his fantasy total to 20 points as the 13.2% of fantasy owners who dropped him this week are pounding their heads up against a wall.