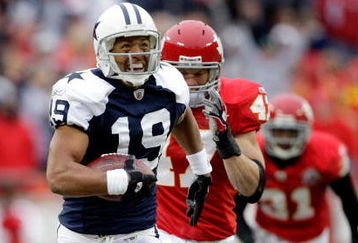 Struggling with some last second calls in fantasy football in week seven? Not to fret, we’ve got you covered. These are specific lineup problems, but hopefully they help some lost souls out there in the fantasy world.

Remember if you ever want your own roster battles debated in our weekly Versus column, just write us in at [email protected] For now, read on four our weeky seven matchup dissections:

Eli is coming off of his weakest statistical game to date this season (193 yards, TD), but with his defense carrying the load and forcing turnover-after-turnover against San Francisco, his services weren’t really necessary.

Manning will be going up against the upstart Redskins, while Romo and the Cowboys take on the Panthers in Charlotte.

While I expect Romo and the passing game to be fine against a weak Carolina defense, I’m giving the slight nod to Eli Manning here.

The Redskins are last in the league in both passing yardage allowed and passing touchdowns allowed. Plus, Hakeem Nicks should be even closer to 100%, making the New York passing attack all the more dangerous. Start little Manning with confidence.

Both of these backs deal with this on a weekly basis, of course, with Spiller splitting carries with Fred Jackson, and Williams sharing a crowded backfield with Jonathan Stewart and Cam Newton. Both of these guys have the talent to be unquestioned RB1s in fantasy, and would be if they weren’t forced to share carries. Alas.

He’s also going up against a Cowboys run defense that has been fairly effective in stuffing the run, despite having played without key members of their D-line for the majority of the season.

They’re both explosive and could break-off a long one at any point. I’m opting for the hotter hand here, though, and that’s Spiller.

Sproles was a fantasy breakout star in 2011, but has gotten off to a slower start so far this season. He’s typically good for a handful of carries (with varying degrees of success), but he’s primarily used in the Saints’ offense as a pass-catcher/safety valve for Drew Brees. The Bucs have been very good against the run this season, but Sproles’ versatility makes that almost a moot point.

Mendenhall was injured again in the loss to the Titans last Thursday, but it looks like he’ll be good to play Sunday. However, since he still won’t be completely 100 percent, we’re likely to see more of a shared backfield for Pittsburgh against the Bengals, which obviously means less Mendenhall.

He’s a risky play because you’re never quite sure how often he’ll be used, but I’m throwing caution to the wind here and would start Sproles over Mendy. Mendenhall was very good in his first game back, but I’m wary of nicked-up running backs. Sproles should have an easier time finding space to roam against Tampa Bay.

Gordon, as you may recall, was the only player selected in this year’s supplemental draft, and the Browns sacrificed a second round pick in order to nab the former Baylor standout. Lately, that appears to have been a solid move, as Gordon has emerged as Cleveland’s most dangerous big play threat. He’s scored three touchdowns in the last two games on plays of 62, 71 and 20 yards.

With Dez Bryant and Jason Witten emerging of late as Tony Romo’s favorite targets, Miles Austin’s numbers have dipped. After 14 catches through the first three games, Austin has reeled-in just six passes combined in the last two games, culminating in a 31-yard effort against the Ravens. To compare, Bryant has caught 21 passes in the last two games, and Witten has caught 19.

So, I’m going to go against my natural inclination to disregard all things related to the Cleveland Browns’ passing game and recommend you sit Austin this week against the Panthers in favor of the rookie Gordon, who faces a terrible Indianapolis secondary. I’d expect WR2/flex type production here.

Vincent Jackson is Josh Freeman’s favorite go-to option, but that hasn’t stopped Mike Williams from making his presence felt, as well. He’s put up nearly identical lines in each of the last two games, totaling eight catches for 228 yards with a score. As mentioned above, the Bucs are facing the Saints at home.

Hill returned from a hamstring injury last week and caught three passes for 23 yards and a touchdown in the blowout win over the poor Colts. Hill, Mark Sanchez and the Jets will face New England Sunday. We know New England is vulnerable to the big play. New York’s passing offense leaves much to be desired, but if anybody is going to put up numbers, it seems likely to be Hill, if for no other reason than they have, like, nobody else. Plus, he’s only played in two games as a pro, but has three touchdowns.

I like them both this week, but will give the slight edge to Williams, just because there seems to be a greater-than-zero chance that Mark Sanchez is hurtling helplessly towards a game in which he has a completion percentage of 0.0. I can feel it.

Gresham has been consistently solid for Andy Dalton all year long, having caught between three and five passes each week. He also has a pair of touchdowns.

Finley, as he seems to be every year, is a tantalizing disappointment. The targets have been there, but he has a nasty habit of dropping easy catches, and hasn’t scored a touchdown since week one. He’s also been dealing with a shoulder injury of late.

Much like the OU-Texas game from this past weekend, the nod here goes to the former Sooner over the former Longhorn. That means Gresham over Finley.

About the author: Taylor Smith