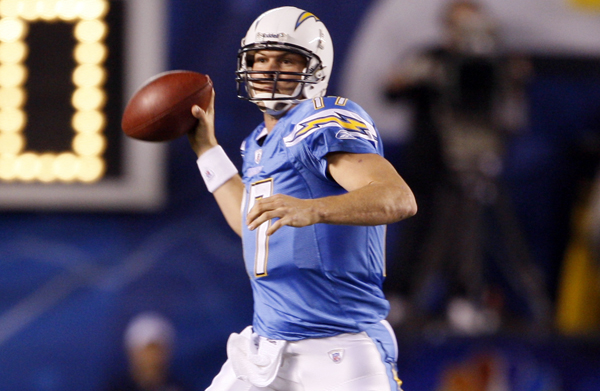 Can Rivers push the Chargers over the hump?

We’re back for the Week 6 edition of Fantasy Football’s Biggest Busts, and this week none of the ten players listed in my Week 5 edition found their way back on the busts lists for a second consecutive week. Yes, even Chris Johnson! This week’s list is running back heavy, and I own a few of these guys myself. In week 6, I played Jamaal Charles who scored all of 4 points, while Shonn Greene (who I can’t believe I’m mentioning with ANY fantasy relevance) sat on my bench and only led all NFL running backs with 34 fantasy points. Hey, that’s fantasy football for you! Can you blame me for starting the NFL’s leading rusher over a guy who didn’t even look like a better rusher than Tim Tebow last year? No.

We’re here to take a look at some Week 6 busts, but also give some fantasy analysis for Week 7. Let’s take a closer look at the Top 10 players who were the biggest fantasy disappointments from Week 6:

Monday Night, Halftime, Chargers lead the visiting Denver Broncos 24-0, and Philip Rivers is passing well including two first half touchdown passes to future Hall of Fame tight end Antonio Gates. Then came the second half. In the third and fourth quarters, Rivers earned himself the #1 spot on the Busts list by turning the ball over five times, making it six total turnovers for the game. Rivers threw a career-high four interceptions and  lost two fumbles, one for a 65-yard touchdown score. He finished with all of 5 fantasy points, in which you were probably better off starting two kickers in Week 6. Rivers isn’t exactly putting up the bounce back year that we expected, but he’s still worth hanging on to. The Chargers (3-3) will enter the bye week, but then after that they travel to Cleveland and then come home to face the Chiefs. Those are two defenses that I would love to start him against.

After taking 81 carries in the last three weeks, Jamaal Charles didn’t come close to that production in Week 6. On the road in Raymond James Stadium, Charles only took 12 carries, and dug up only 40 yards on the ground. As the Chiefs got down big on the board, Charles was almost obsolete in this offense. The Bucs’ defense did a superb job of taking away the run so that they can get backup QB Brady Quinn to make some mistakes. They did just that. Charles’ four point performance in Week 6 was his third single-digit output of the season, so he’s been hit or miss. But at the end of the day, I love Charles’ big play potential and the fact that he can explode for 30 or 40 on any given Sunday. The Chiefs (1-5) enter a well needed bye week this week, but Charles remains a weekly must start.

In the last two weeks, Stevan Ridley became a fantasy football household name. Ridley carried the ball 50 times for 257 yards and three touchdown scores in the last two weeks, and although he was facing a stout Seattle defense on the road, we still expected good production. Ridley got the carries, but had nowhere to run at any point of the game. Ridley put up just 3 points, his 2012 season low. The Patriots (3-3) will go home to Gillette Stadium to take on the visiting division rival New York Jets on Sunday. With the Pats at home, I start Ridley and expect big numbers. The Jets will be heavily focused on Tom Brady as most defenses are, and that will once again create nice opportunities for Ridley to shine.

Although he has not carried the ball 20 times in a game this season, The Burner has made the most out of his carries. He has scored double-digit fantasy points in every game after Week 1, and has found the end zone on three occasions. In Week 6 at home against the struggling Oakland Raiders, Turner was not a factor. Turner carried the ball just 11 times for 33 yards, and was bottled up immediately almost every time he took the ball. The Falcons (6-0) will enter their bye week, and will return to action in Week 8 at Philadelphia. You’re going to need a replacement this week while Turner’s on bye, and if you have some depth might want to sit him in Week 7 as well. But I still like his touchdown chances.

Beast Mode wasn’t really in effect on Sunday as the New England run defense did a great job containing the toughest running back in the league. Lynch took 15 carries for 41 yards, and scored a season-low 5 fantasy points. Lynch is allowed a bad week because he’s been stellar thus far in 2012. Things don’t get much easier in Lynch’s near future as he travels to Candlestick Park to take on the division rival San Francisco 49ers on Thursday Night Football. Lynch has struggled in this stadium the last two years, totaling just 62 yards and 23 carries with no scores. Also note that the 49ers have only allowed one touchdown to a running back thus far in 2012. This isn’t a pretty matchup for Beast Mode owners, but he’s a weekly starter unless your RB depth is really good.

In Week 6, Matt Schaub played his worst game of the season at home against Aaron Rodgers and the Green Bay Packers. The Texans passing attack really never clicked, and it definitely didn’t help that the Texans got themselves in an early hole on the scoreboard. Schaub threw for 235 yards, but threw two interceptions. Schaub failed to throw a touchdown pass for the second time this season and scored a season-low 5 fantasy points. The Packers pressured Matt Schaub into bad situations all night long. Schaub plays another home game in Week 7 against the visiting Baltimore Ravens, and I definitely like Matt Schaub this week. Not only is this defense depleted, they have allowed more than 250 passing yards in four of their last five games. Last time the Texans hosted the Ravens, Schaub threw 62 passes, for 393 yards and three touchdown passes.

If I’m a Gore owner, Week 6 was awfully disappointing for me. The 49ers fed the rock to Gore only 8 times, and totaled just 36 yards on the ground. The New York Giants sustained long drives and kept the ball away from the 49ers for most of the afternoon. When the Niners did have the ball, they had no answer for the stifling Giants defense. Frank Gore will play at home in Week 7 against the division rival Seattle Seahawks who have been quite impressive as of late. According to past stats, I would probably start Gore regardless if this matchup looks tough. Although the Seahawks run defense is ranked second in the NFL, Gore averages 168.4 yards per game against them at home, including two monster 200-yard games. Green light for Gore.

Don’t look now, but Reggie Bush is trending to be a weekly fantasy dud. In the last four weeks, Bush has not rushed for more than 67 yards, has not reached 20 carries in a game, and has found the end zone just once. The Dolphins are in the midst of discovering the abilities of their new rookie talent Ryan Tannehill, and it looks like they want to become more of a passing offense. That doesn’t totally hurt Bush’s value, as he is a very good pass catcher out of the backfield. After coming off his lowest fantasy output of the year with just 5 points, the Dolphins (3-3) will enter their bye week. They will travel to New York to face the Jets in Week 8, and last time Bush faced them in Week 3, he only managed 61 yards.

Are Bowe owners upset that Matt Cassel got hurt or what? Cassel had Bowe in the Top 5 in the NFL in targets before Brady Quinn stepped in for his injury. Bowe caught just three passes for 21 yards on Sunday, and managed a measly 2 fantasy points, his lowest of the year. Through Week 5, Bowe had two 100+ yard receiving games, and three touchdowns. The Chiefs (1-5) enter the bye week in Week 7, and if you own this guy you better hope Matt Cassel returns for Week 8. They will return to Arrowhead Stadium, and hopefully Cassel returns with them. But if no Cassel, I’d say no Bowe.

This one barely makes the list because T-Rich left the game early due to a rib injury. Richardson did have 14 carries for 37 yards before getting hurt, and only produced 4 fantasy points for his owners on Sunday. Richardson has been proving to be a wonderful rookie fantasy draft pick, after scoring a touchdown in four straight games prior to getting injured in Week 6. Going forward into Week 7, Richardson and the Browns will travel to the Lucas Oil Dome to take on the Indianapolis Colts and their 29th-ranked rush defense. The Colts defense has surrendered just over 159 yards per game so far in 2012. Right now he is listed as questionable, but you are praying to get him back for this matchup.

My Week 6 fantasy busts list includes five players that are on bye for Week 6, so let’s take a closer look at the five other players who will be in action this week.

I expect Stevan Ridley to jump off this list in a hurry. Brady and Co. are a little angry after last week’s loss in the final minutes to the Seahawks, and this offense will be firing on all cylinders. Brady will have his play action passing in brutal effect, and that will open up gaping holes for New England’s young back.

Lynch and Gore will meet head-to-head in a huge division matchup on Thursday Night Football. This matchup has favored Gore a lot more than it has favored Lynch in the past, but I honestly think it’s going to be a defensive battle. I think both backs are going to have to scrape for their yards as both respective defenses remain stingy. If I had to choose who is going to rack up more fantasy points, I’d probably say Marshawn Lynch.

Matt Schaub will have his way with the Ravens on Sunday. The Texans will not lose two in a row at home especially with Baltimore missing Ray Lewis and Ladarius Webb. I predict that Schaub has one or two long scores through the air.

If Richardson can go, I love him for Sunday. The Colts run defense, as I said earlier, is awful. I think Richardson will be even harder to take down on turf as he will really be able to show off his footwork.

Don’t forget to check me out in Week 7.