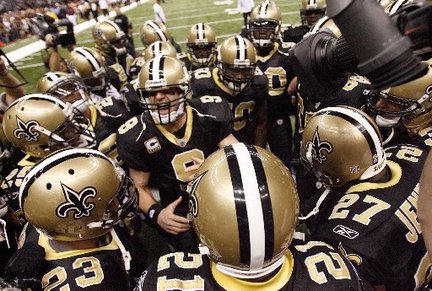 Catch up on the Saints and more in this week’s Baba Ghanoush.

Welcome back football fans to NFL Soup’s Friday Baba Ghanoush. After a brief hiatus, the Baba Ghanoush (still a real thing) is back for good, being served as hot as ever before. This week is no exception, given the numerous controversial topics that have covered NFL headlines this week. I’m talking Saints bounty scandal and its likely federal court fallout, Rob Parker’s absurd comments on Robert Griffin III and how Roger Goodell wants to further ruin the game of football.

So grab a helping of the Baba Ghanoush, sit back, relax and fill yourself up on the hottest of NFL news. Here’s what I’m serving up this week:

BountyGate Still Far From Over

Oh, you thought Paul Tagliabue’s ruling on the Saints bounty case was going to put all of this to an end?

Tagliabue, the NFL’s Commissioner before Roger Goodell, was put in charge by Goodell to oversee the appeals by the four players—Jonathan Vilma, Will Smith, Scott Fujita and Anthony Hargrove—suspended for their roles in the bounty scandal. After numerous testimonies by the players and coaches involved, such as former Saints defensive coordinator Greg Williams, Tagliabue made a decision that ended the suspensions.

Larry Holder of The Times-Picayune in New Orleans has numerous official quotes from the ruling, including a statement from Tagliabue, who confirmed the NFL’s findings of a bounty program in place to be true, yet blames the coaches and not the players.

“Unlike Saints’ broad organizational misconduct, player appeals involve sharply focused issues of alleged individual player misconduct in several different aspects,” says Tagliabue. “My affirmation of Commissioner Goodell’s findings could certainly justify the issuance of fines. However, this entire case has been contaminated by the coaches and others in the Saints’ organization.”

Basically, Tagliabue agrees with what Goodell and the NFL about what they originally released after their investigation, including Vilma’s $10,000 bounty on Brett Favre, but blames the coaches for allowing it to continue for three years. Williams, as well as then-assistant coach and current interim head coach Joe Vitt and former coach Mike Cerullo, one of the whistleblowers in the case, all testified in the case.

However, and this is where this all really gets started, is that Vilma is still going forth with his defamation lawsuit against Goodell, and the three coaches have publically disagreed with what the others have said about them. Williams, who has been known as the “ring-leader” of the bounty program, says Vitt made them continue the bounty program even after the NFL originally investigated them. Vitt wants to continue his pledge of innocence, vowing to go to federal court if necessarily.

Even though this whole bounty program case continues to make the NFL look bad (but not as bad as those replacement referees at least), federal court may be good idea to finally settle all of this. Even though there have been penalties for those involved, and there were lawyers in Tagliabue’s hearings, it’s still not done in the same way as our country’s legal system. So if and when this all goes to federal court, it will be run properly through the legal system and have serious ramifications for those who are found guilty of perjury.

ESPN’s First Take has been known to create controversy due to its commentators making outlandish claims in order to get a reaction. But it wasn’t Skip Bayless or Stephen A. Smith—it was Rob Parker, who was talking about the “blackness” of Redskins quarterback Robert Griffin III.

Yes, that’s what Parker is concerned about when it comes to the rookie sensation.

That’s a very noble and sincere quote from Griffin, who makes a very good point in the process. People should look at people and remember people by who they are as people, not by what their skin color is.

Parker doesn’t see it that way. He says on air (video link here) that he wonders if Griffin is “a brother, or is he a cornball brother?” Parker continues, “He’s not really. He’s black, he does his thing, but he’s not really down with the cause. He’s not one of us. He’s kind of black, but he’s not really like the kind of guy you really want to hang out with.”

Oh yeah Rob Parker, because you know Griffin so well as a person to determine whether or not you’d want to hang out with him. But wait, the comments get worse, making Parker look like even more of an idiot.

“I want to find about him,” Parker adds. “I don’t know because I keep hearing these things. We all know he has a white fiancee. Then there was all this talk about he’s a Republican, which there’s no information at all. I’m just trying to dig deeper into why he has an issue.”

Rob Parker, why does it matter who Griffin is engaged to, or what his political beliefs are? That doesn’t give you the right to define or judge him. Especially when he then calls Griffin a brother for having braids in his air. Smith, who like Griffin and Parker, is black, stated that he was “uncomfortable” with the fact that they went into that topic of conversation, especially with what Parker’s comments were specifically.

ESPN has suspended Parker indefinitely. Which is really for the best, and I hope he doesn’t ever get hired again, anywhere. Parker had no right to go where he did in his rant, especially since he doesn’t really know Griffin as a person, only on what he’s heard. Not only do his comments make him look unqualified now as a commentator, but they also make him look like an unmitigated jackass.

At this point, after events like the lockout and replacement referees, it’s getting harder to lose respect for NFL Commissioner Roger Goodell—since I have none for him—but somehow I’ve found a new way to.

This first way comes courtesy of a TIME magazine excerpt from an interview with Goodell I found over at ProFootballTalk.com. We all know that Goodell wants to eliminate the kickoff, which has been, and always will be, a stupid idea. But he pretty much already has with moving the ball up from the 30 to the 35, resulting in more touchbacks.

But this new idea, which he actually got from Buccaneers head coach Greg Schiano and is now proposing it to the league, would involve eliminating the kickoff, putting the ball back on the 30, and having the team that just scored face a fourth-and-fifteen, where they could either go for it or punt.

Rather than go on an angry rant about how stupid that is, I’m just going to shake my head (plus I need the energy for a few more paragraphs). But I will say this: Kickoffs are part of the game. That’s football. Goodell needs to know that football is going to be a violent sport no matter what. People are going to get hurt. Careers will be cut short. There’s only so much you can do to prevent injury.

The second, and more recent, proposal from Goodell would be to expand the playoffs from 12 teams to 14 or 16. This, like his proposal for an 18-game regular season, is another option in figuring out how to eliminate one or two preseason games (and, obviously, has nothing at all to do with money, since the NFL totally does not make more money from regular season and playoff games).

Even though I believe everyone would love for the preseason to be reduced from four games to two or three, I hope enough people like myself agree with me that it should not come at the expense of a longer regular season or expanded playoff field.

A 16-game regular season is long enough, and a 12-team playoff field is perfect. Four division champions and two wildcard teams in each conference, top two seeds in each get byes. Twelve out of 32 teams forces teams to be the best during a 16-game season, while 20 teams sit at home come January.

This is the NFL. This isn’t the watered-down NBA where half the teams in the league make the playoffs. Or where, like the MLB, teams can play games for days in a row.

Goodell wants to prevent injury, but expanding the regular season and/or playoff field is only opening the door to more injuries, since starters don’t play a lot in the preseason anyway. He is one contradicting and confusing man.

Can we get a replacement commissioner yet?

Michael Cellars currently attends Kent State University, where he is majoring in English with minors in writing and psychology. During his free time, he surrounds himself with as much of the NFL as possible, while also being a contributing writer for NFL Soup. Michael’s favorite team is the Green Bay Packers, who he has been an avid fan of his entire life. Twitter: @NFLSoupMichael