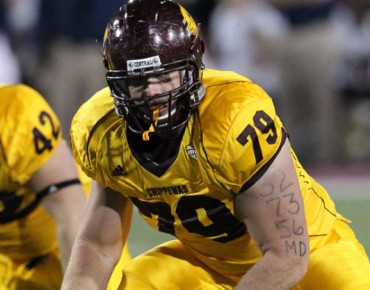 The Kansas City Chiefs were a pretty bad team in 2012. Only a few months after the season, they shed their head coach and starting quarterback, and suddenly things are starting to look up. With Andy Reid calling the shots and a more stable quarterback in Alex Smith under center, a good draft could potentially propel Kansas City to the brink of the playoffs in 2013.

That’s the hope, at least.

With the draft now a thing of the past, it’s time to reflect on what the Chiefs did during the three-day event, and see if they landed enough impact players to go from 2-14 to above .500 in just one season.

Here are all the 2013 draft pick for Kansas City, along with grades and analysis:

You can’t really knock this pick, but I thought Joeckel was the better left tackle. Fisher is nastier in run-blocking and arguably the better athlete, but Joeckel was the most can’t-miss prospect. If the Chiefs move Fisher to the right and keep Brandon Albert, this pick works out great. If not, I think I would have rather had Joeckel and then traded Albert.

Kansas City has Tony Moeaki and Anthony Fasano, but those guys are plodders with little range and no deep speed. Kelce isn’t a burner, either, but offers a little more upside than what KC has currently. He’s a little rough around the edges, but he’s a good athlete and is already a sound blocker.

Davis has very good straight line speed, but there is little wiggle to his game. He’s not overly agile or elusive, and he’s been fragile as glass. With that said, he’s a solid complement for Jamaal Charles, albeit a bit of a reach.

Now this is a value pick. Johnson isn’t a freak athlete, but he’s a commander of the middle of a defense, hits hard, and tackles about as well as anyone in this year’s draft. He can develop into a starter and help man the middle of KC’s defense in a year or two, if not sooner.

Kansas City needed more depth in their secondary, so they grab Commings, who has great size and some interesting upside.

The Chiefs have a new regime in place, so it’s only natural to try to make-over the trenches a bit. Their offensive line isn’t bad, but they grab some center depth here in Kush, who has excellent size and strength for the position.

Wilson is a sound blocker, but he’s not going to offer a whole lot else. That actually fits KC’s offense, but his roster spot could be in jeopardy after the team traded for Anthony Sherman. That could mean this was a wasted pick.

Catapano didn’t face elite competition, but he was a monster pass-rusher as a senior (12 sacks). He’s actually a heck of an athlete with very nice timed speed. That could mean he could be a fit in KC’s 3-4 as an outside edge rusher. He’d have to add bulk if he wanted to play on the line.

I didn’t love Andy Reid’s first draft, but I didn’t hate it, either. I would have drafted Luke Joeckel at number one overall, but Fisher is still an elite tackle and is probably the better right tackle. I love the Nico Johnson pick, and see him as an eventual starter. Everything else is for depth, while Princeton pass-rsuher Catapano is an interesting sleeper if he finds the right position with the Chiefs. KC hung it’s hat on the bread and butter positions in this draft, and that was probably the right thing to do considering they already have two studs at the skill positions in Jamaal Charles and Dwayne Bowe. I trust they’ll get more creative with their picks in 2013. But for now, they did a fair job and should work towards being a much more competitive team this season.