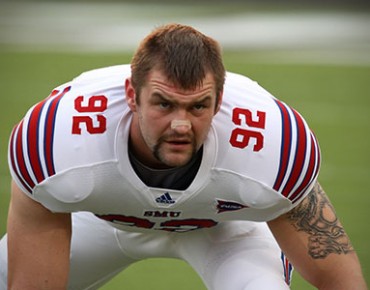 Absolute physical freak. Former discus thrower who earned a scholarship at SMU for football. Ran a 4.60 forty at 6’8 277, which is amazing all by itself. Has adequate arm length that he does a nice job of shedding blocks with. One of the strongest players of the draft, and really has the moldings to be a J.J. Watt/Calais Campbell type if coached up properly. Looks to be an ideal 3-4 five technique defensive lineman.

Pretty raw and inexperienced. Lacks leverage which doesn’t allow him to make a push at times. Too much of an arm tackler, and doesn’t change direction well. Will need to learn the fundamentals of the game to be a huge impact, but is still worth a late first round selection for the upside.

Hunt is a physical specimen that is still learning the game of football, which is clearly a flaw, but also tells you about his upside. He has an excellent combination of size, strength and speed, and projects well at the next level if he lands in the right system. He could easily get into the first round, but will certainly be gone by the middle of round two.