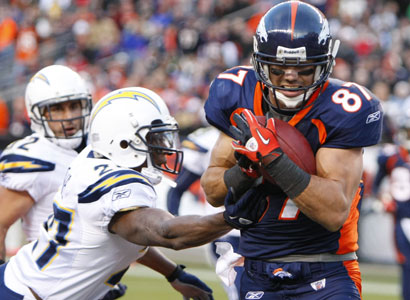 A week later, nothing changes, as Denver ends 2012 on top.

Although Peyton Manning is not back to being the old Peyton Manning, he is still putting up great fantasy numbers this season. Entering week 6, Manning had the 5th most fantasy points for quarterbacks. His lone bad game came in week 2 against the Falcons where he only managed seven fantasy points, but outside of that game he’s never scored less than 20 points in a single game.

San Diego meanwhile, will surely look to increase the workload for Ryan Mathews who looked good last week with 19 fantasy points on only 18 total touches. He has a nice match-up this week as Denver was gashed last week by the Patriots.

We’ll breakdown the most important match-ups for tonight’s game in our Monday Night Football Fantasy Versus Decision Maker:

All I heard this season was about how Manning couldn’t play outdoors, well this season he’s 2-2 outdoors with four good fantasy games while his lone bad game was, wait for it, in a dome. San Diego’s defense is decent but not great, and they are giving up the 9th most fantasy points to quarterbacks this season, Qualcomm stadium is also outdoors.

With the loss of Vincent Jackson in the offseason, Rivers now has only Malcom Floyd and Robert Meachem to stretch the field, and a bunch of slot receivers who clog up the middle of the field.

Rivers has only one game of 20 plus fantasy points, compared to Manning’s four. I’ll take Manning.

Denver can be run on as was shown last week when the Patriots rushed for a tune of 251 yards with three touchdowns. Last week in our Sunday Night Football Fantasy Versus I called that Mathews would have 15 carries for 90 yards and a touchdown, well I was pretty close as he ended up with 12 carries for 80 yards and a score. He could come close to 25 total touches this week.

McGahee seems like he hasn’t lost a step at all. In week 5 he had a key drop on fourth down, also he fumbled late in the fourth quarter, but outside of those two plays he’s look really good this season. He doesn’t have a great match-up this week, but Manning will make sure he keeps the balance on offense and McGahee will get the goal line carries as usual.

I like both of these running backs, but I lean slightly towards Mathews.

If you’re in deeper leagues and you have Jackie Battle, I’m sorry he’s just not good. I also predicted his terrible game last week. He may still be getting the goal line carries, but he’s not a good running back.

Thomas and Decker are one and two in receptions for the Broncos this season, with 30 for Thomas and 28 for Decker, while both have 2 touchdowns. The main difference between these players is that Thomas has the ability to take it to the house at any time, while Decker is more of a possession receiver, which still has a lot of value in a Manning lead offense.

For tonight’s game I’ll rank them Thomas, Decker, then Floyd.

Although Stokley doesn’t get a lot of targets like Decker or Thomas, he has been making the most of them, as he has scored two touchdowns in the past three games.

Finally Meachem did what fantasy owners and the Chargers coaches were looking from him all season. Last week he busted out with 67 receiving yards with two touchdowns.

It figures to be a higher scoring game, so both could have a decent game, but I’ll roll with Meachem based on his big play ability.

Guess who has the most fantasy points on the Chargers at the tight end position, if you would have said Gates you would have been off by nine points! Dante Rosario leads the Chargers with 21 points compared to just Gates’ 12. That’s how bad it’s been for Gates this season.

I threw Tamme in there because he’s owned in 85% of leagues compared to his teammate Joel Dressen who is only owned in 5% of standard ESPN leagues. However, Dressen might be the better play over Tamme, as he has scored a touchdown in three straight games.

If I’m ranking all three, I’d have to go Gates, Tamme, and Dressen. Gates is bound to have a good game soon, right?

Should be plenty of scoring tonight, but I prefer Prater who’s got the bigger leg.

Denver had four sacks last week, and they will be licking their lips tonight with all the problems the Chargers have at the left tackle position.

Give me the Denver Broncos.