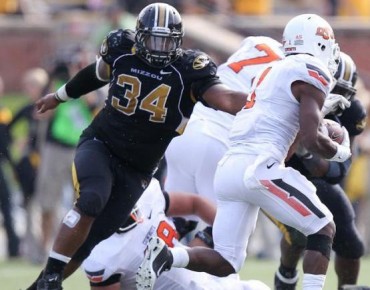 Big time hustle player with upside. Very quick and agile, getting into the backfield in a hurry. Recovers well from cut blocks and doesn’t quit on many plays. Excellent lateral ability to keep up with developing runs. Relentlessly gets into the backfield which is a good and bad thing. Initial burst off of the snap is unbelievable at times. Hard to block as he’s always moving his feet and keeping lineman on their toes. Looks to be an excellent three gap penetrator at the next level.

Needs to be more violent with his hands, at times just running into lineman with his hands down. Could stand to become a better wrap up tackler. Needs to work on control when he gets through the line. Has a past knee injury. Closing speed isn’t ideal.

In the end, Richardson is a well balanced defensive tackle who can be very effective at the next level in either a 3-4 or 4-3 scheme. He has the size and strength to mix with the big boys right now, and is versatile enough to be used in a variety of ways. He’ll almost certainly hear his name called in the middle of the first round, with an outside chance of being a top-10 pick.

Draft Range: Middle of 1st Round