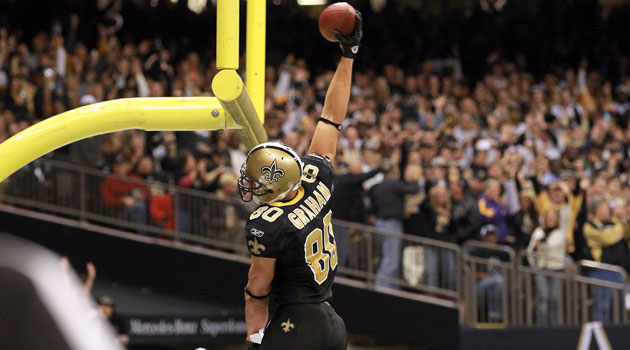 Jimmy Graham is just one player who continues to disappoint.

If you think Drew Brees is going to give up on this season, guess again. Besides the fact that the New Orleans Saints are 0-4 entering tonight’s game versus the San Diego Chargers, Brees has a chance to make history if he throws at least one touchdown pass. Last week Brees threw a touchdown pass in his 47th straight game which tied Johnny Unitas’ record which has stood for over 50 years. Barring a injury I expect Brees to break that record tonight.

Let’s take a look at some match-ups for tonight’s game in our Sunday Night Football Fantasy Versus Decision Maker for Week 5:

Brees will be throwing all game long thanks in part to New Orleans shaky defense, and oh yeah he leads the NFL in passing yards and is 3rd in most fantasy points for quarterbacks.

As mentioned above New Orleans has a shaky defense, especially in their secondary, as they have given up the 7th most fantasy points to quarterbacks this season, so I think Rivers can have a good game here as well.

You’re still rolling with Brees over Rivers, but both should come out with top-12 performances for QB’s.

I’m not understanding all this love that Battle is getting from all of these other experts. Have they ever watched him run the ball, or are they just looking at stats? He is terrible, and the only good thing about him is his goal line work, but do you really want to bank on that every week?

I’ve never been a Ryan Mathews guy, ever, but if you’re asking me him or Battle, it’s Mathews.

Bold Prediction: Battle 8 carries for 10 yards, Mathews 15 carries for 90 yards and a touchdown.

Pick your poison. Both players have been nonexistent outside of week 2 when they both had double-digit fantasy days.

I like Thomas’ skills a lot more then Ingram, so I’ll roll with him.

Colston rebounded from a rough first three weeks with 9 catches for 153 yards and a touchdown in week 4, which resulted in 21 fantasy points for a lot of happy owners. There’s no doubt with Lance Moore (hamstring) out Colston will be Brees’ go to receiver tonight.

Floyd is the number one receiver for San Diego, but he hasn’t performed like one yet.

I believe in both of these receivers talent, but I like Colston a lot more tonight.

I had Jimmy Graham as my number one tight end in fantasy before the season started and he still remains as my top guy.

Gates looks old and frankly not healthy. As bad as New Orleans has been against the pass this season, they are giving up the 3rd least amount of fantasy points to tight ends this season.

It’s Graham and it shouldn’t be close.

After taking over for Nate Kaeding (groin) last week, Novak made all three of his field goal attempts, while also making 4 extra points.

Hartley has one of the bigger legs in the NFL, but he can be inconsistent at times. I’ll go with Novak.

I wouldn’t advise starting either of these defenses, but if I had to I’ll take my chances with San Diego.