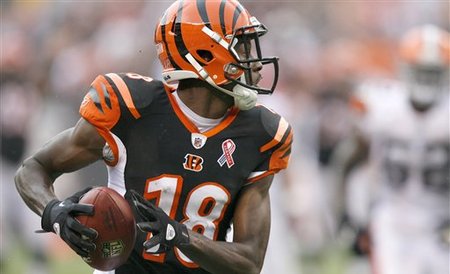 The Cincinnati Bengals can ill afford to be 1-3 in the AFC North, and that could happen if they lose to the Pittsburgh Steelers on Sunday Night Football. The good news for the Bengals is that the Steelers have yet to win a game on the road this season (0-3), and they will also be without their best player on defense, Troy Polamalu (calf).

Some more bad news for the Steelers this week, as they will be without their top two running backs,  Rashard Mendenhall (Achilles), as well as Isaac Redman (ankle). Pittsburgh will have to rely on Ben Roethlisberger to lead this team in the passing game if they want any chance to win this game.

Let’s breakdown the most important match-ups for tonight’s game in our Sunday Night Football Fantasy Versus Decision Maker for Week 7:

Andy Dalton has three 300 plus yard passing games and three games with 3 touchdown passes. I get the feeling that the Bengals are turning into more of a passing team than a running team like they have been in the past.

The thing with Big Ben is that he’s been really great or just average in terms of fantasy. He’s had only one game of 20 plus fantasy points, compared to Dalton who’s had three games of 20 plus points.

I like Dalton over Roethlisberger, although I think both should have a nice fantasy day.

With Mendenhall and Redman out it makes this decision a whole lot easier.

Sure Green-Ellis hasn’t been a big disappointment this season with zero 100 yard rushing games, but he is still their main back and will get plenty of chances to make an impact in fantasy.

I’d stay away from Dwyer if you can, I’ll also take the “Law Firm” over Dwyer.

A.J. Green is a beast. He’s scored double digit fantasy points in five of six weeks this season and has topped 20 points in two of those weeks.

Wallace has eight fewer receptions and fifteen fewer target then Brown, but yet he has 20 more fantasy points, mainly because of his four touchdowns, compared to just one for Brown. I still like Brown over Wallace because he will get his catches and yards, while Wallace is more dependent on long gains.

For tonight’s game I’ll rank them, Green, Brown, the Wallace.

I’m not buying this hot start from Heath Miller at all. He did the same thing last year and fell off fast.

Gresham has been very consistent this season. He’s caught at least three passes and has had over 30 yards in every game.

Each kicker has only missed one field goal this season.

I expect it to be a high scoring game, but I’ll roll with Nugent.

I don’t understand how these so called fantasy experts continuously rank the Pittsburgh defense in the top-10. Guess what, they are the 22nd highest scoring defense in fantasy this season, even if you take away the six teams on the bye, they’re still not even close to a top 7 defense like a well respected website has them.

Having said all of that, I’m a contrarian so I’ll take the Bengals D/ST.