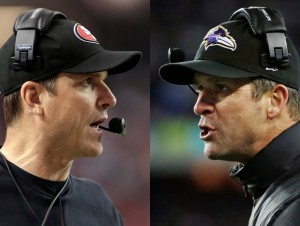 The Harbowl lived up to the hype.

The most popular unofficial holiday in America, Super Bowl Sunday, is finally here.

In case you’ve been living under a rock (one with wifi, I’d assume, since you’re reading this), you’re aware that we’re gearing up to see John Harbaugh’s Baltimore Ravens take on brother Jim Harbaugh’s San Francisco 49ers from New Orleans, with kickoff set for 6:30pm ET.

So, we here at NFL Soup have polled a few of our writers and asked them to opine on all things Super Bowl XLVII, as well as a few draft and postseason awards predictions.

Terrence Kirker (@TerrenceKirker): 49ers 30, Ravens 20: Colin Kaepernick will be too much for the “old” Ravens to stop, and Joe Flacco will throw two interceptions.

Kevin Roberts (@NFLSoupKevin): Ravens 27, 49ers 20: The Ravens will win because they have emotion and momentum on their side, and they’re actually quite good on both sides of the ball now that they’re healthy.

Thomas McFeeley (@TomMcFeeley): Ravens 27, 49ers 17: I’ve been waiting for Colin Kaepernick to make a “rookie mistake”, even though he’s technically a “sophomore”, but he hasn’t, yet. Joe Flacco is not elite, he’s Phil Simms. But, Flacco is going to play a very good game, aided by circus catches by Torrey Smith and renegade running from Ray Rice to keep San Francisco on its toes.

Michael Cellars (@NFLSoupMichael): Ravens 24, 49ers 20: Joe Flacco and co. have the ability to exploit the 49ers’ defense. Also, I feel as though the Ravens are a team of destiny with Ray Lewis and his ensuing retirement.

2. Who will be Super Bowl MVP?

3. Name one (or two) players on each team you think will be their X-factor

Terrence: Torrey Smith and Ed Reed for the Ravens. Colin Kaepernick and Justin Smith for the 49ers.

Kevin: Bernard Pierce for the Ravens. We’ve already seen his impact, and if the Ravens have success running the ball on the tough 49ers frontline, it’ll probably be thanks to Pierce playing behind Ray Rice. For the 49ers, I say Randy Moss. Dude claims to be the best of all-time and doesn’t like his role, so it’s time for him to show up.

Thomas: Torrey Smith for Baltimore. If he can break a big play early, the Ravens’ offense can open up against a very good San Francisco defense. For the Niners, Colin Kaepernick. If he continues to play mistake-free football with poise, a very good defensive team will roll to victory.

Michael: Anquan Boldin for the Ravens, and for the 49ers, the play of their offensive line.

Taylor: The exterior of the Baltimore front seven. Can they keep contain on Kaepernick? And the secondary for the Niners. Can they cut-off the deep ball that the Ravens have had rolling of late?

Kevin: Colin Kaepernick will be benched due to injury or terrible play and Alex Smith will save the day. That goes directly against my logic and pick to win, but hey, it be like that sometimes.

Thomas: Ray Rice rushes for 200 yards, and the Ravens hold the ball for 40 minutes.

Michael: Randy Moss has over 100 yards receiving with a touchdown.

Taylor: At some point, Jim Harbaugh pulls a Sean Payton and calls for a ballsy onside kick. Only this time, it backfires.

Terrence: Rookie running back Timmy Smith of the Redskins torches the Broncos for 204 yards rushing and two scores in his first ever start in Super Bowl XXII.

Kevin: Steve Young against the Chargers in Super Bowl XXIX. He threw six touchdowns like a boss, son.

6. What’s been the greatest Super Bowl ever?

Terrence: Super Bowl XLII. One “Giant” loss for the Patriots.

Kevin: I think it was Broncos-Packers back in 1998. It was 24-all in the fourth quarter and the Pack had the ball on Denver’s side of the field with under two minutes to go. Had they scored, we probably would’ve seen overtime.

Thomas: Super Bowl III between the Packers and Jets, for its significance to the sport.

Taylor: Super Bowl XLIII between the Cardinals and Steelers in 2008. Arizona stormed back from a big deficit to take a 23-20 lead with 2:30 to go, only to see Ben Roethlisberger take the Steelers the length of the field, culminating in the insane Santonio Holmes tiptoe catch in the corner of the end zone to win it.

7. Who is your way-too-early pick to face-off in next year’s Super Bowl?

Kevin: New York Giants and New England Patriots. Because both of these teams are built to go on a run at any moment and it just makes more sense than anything else right now.

Taylor: Seattle Seahawks and Houston Texans in what would probably be the lowest-rated Super Bowl ever. Then again, I’m a complete homer, so I’d love it.

8. Who will the Chiefs take No. 1 overall in the upcoming draft?

Terrence: Nobody. They’ll trade down for more picks.

Kevin: They should probably take a quarterback, but I think they’ll make a run and draft their own guy in a year or two, when the QB class is better. For now, the pick should be tackle Luke Joeckel out of Texas A&M. They can let Brandon Albert walk and use that money elsewhere.

Thomas: Trade the pick to the Eagles at No. 4 and draft West Virginia QB Geno Smith (Eagles take Joeckel No. 1).

Michael: They’ll trade it away.

Taylor: They obviously need a QB, but any QB from this class No. 1 overall is a reach. Common sense says to play it safe and take Joeckel, but I could easily see them falling in love with someone like Geno Smith, as well.

9. Who should win this season’s regular season MVP award?

Kevin: Adrian Peterson. The running back position doesn’t get enough respect. Here’s the deal: Both he and Peyton Manning had a tough injury to overcome and both were great story lines. Both got their teams to the playoffs. Manning, however, didn’t come nine yards away from breaking an insane record. Sorry, but anyone who goes for 2,000 rushing yards and gets into the playoffs earns my MVP vote. At the very worst, this should be a co-MVP year.

Taylor: Adrian Peterson and Peyton Manning. Peterson’s physical feat of coming back from an ACL tear last December to play a full season and nearly break the rushing record is nothing sort of insane. Not only did Manning come off four major neck surgeries, but he then had to come into a completely new situation and learn a new system with all-new teammates. Still went 13-3 and could easily be representing the AFC this Sunday. I say they’re both quite deserving.

10. Defensive Player of the Year?

Kevin: J.J. Watt, and it’s not really even close. Aldon Smith is up there, but without Justin Smith he’s not been the same player. Watt still had the Houston D looking tough even without Brian Cushing, and he almost broke the sack record as a 3-4 DEFENSIVE END. That’s crazy.

Taylor: J.J. Watt. 20.5 sacks. 23 more tackles-for-loss. 16 deflected passes. All as a 3-4 defensive end. This should be unanimous. Only real contender should be Cincy’s Geno Atkins.

Kevin: The guy who doesn’t get MVP should get this. Neither should win both.

Taylor: If I’m giving them both the MVP, I can’t not give them both this, as well, right? Peterson and Peyton.

12. Offensive Rookie of the Year?

Terrence: Russell Wilson, but Andrew Luck will win it.

Kevin: So many guys to choose from here. I doubt we’ll have a wrong/bad answer in the bunch. I’m going to say RGIII. He put a 3-6 team on his back and won seven straight games to get into the playoffs. And had his knee not given out on him in the playoffs against Seattle, we might still be talking about him.

Taylor: I’d be fine with either Griffin, Luck or Wilson winning it, but I’ll say Griffin. Luck may have been doing more with less, but he was also playing a weak last place/AFC South schedule. RGIII took the Redskins from worst-to-first in one of the league’s toughest divisions.

13. Defensive Rookie of the Year?

Kevin: Luke Kuechly from the Panthers. Just a tackling machine. There are other good candidates, but the guy lived up to his pick value and then some. He’ll be a beast in the middle of Carolina’s defense for years.

Taylor: Kuechly shifted from OLB to ILB once Jon Beason went down for the year, and looked to be the beast that we all thought he’d be coming out of Boston College. Another uber-athletic tackling machine in the mold of Patrick Willis and Brian Cushing.

Kevin: Bruce Arians. The guy took a terrible team with a rookie quarterback from picking No. 1 overall to a competitive team that snuck into the playoffs. Had he not missed the Wild Card game due to illness, his 2012 story could’ve ended even better.

Taylor. Bruce Arians. Pete Carroll and Jim Harbaugh (again) should have something to say about this, but Arians will be the sentimental favorite for the way he rallied his team while filling-in for the ill Chuck Pagano. Personally, I don’t think Indianapolis was really that good, and feasted on a super light schedule, but Arians does deserve credit.

About the author: Taylor Smith