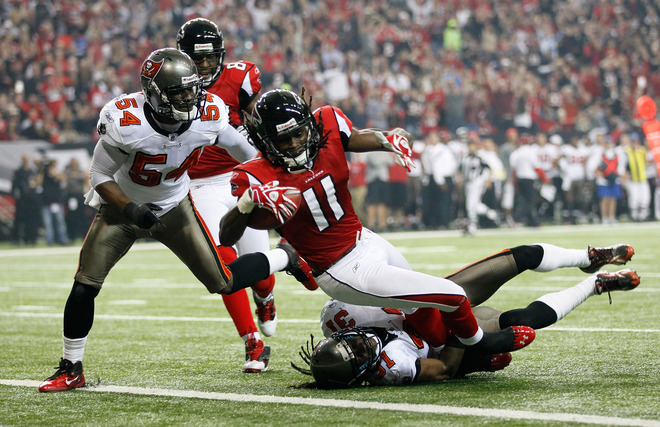 Jones showed up for fantasy owners in week 12, despite being hurt.

In keeping with the Thanksgiving tradition of over-stuffing on Thanksgiving and then paying the price the rest of the weekend, the NFL served up ridiculous stat lines on Thursday (see Brady, Tom; Bryant, Dez; and Griffin III, Robert), only to revert to mean on Sunday where offenses acted more like Uncle Morty sleeping in the La-Z-Boy.

Take the Day Off at Home, Not on the Field: Injured Rams WR Danny Amendola convinced his coaches to let him play Sunday and he rewarded desperate fantasy owners with 1 catch for 37 yards. Not to be outdone, however, was Buffalo’s Fred Jackson, who passed all of concussion tests during the week and then concussed his owners with six rushes for 16 yards and one catch for six yards.

On the Flip Side: Atlanta WR Julio Jones, questionable all week and a game-time decision on Sunday rewarded the faithful with six catches for 142 yards and 1TD.

Following Colin Kaepernick’s ugly interception with 43 seconds remaining in the first half, Fox TV cameras started honing in on sidelined starter Alex Smith. With Drew Brees racing onto the field holding a 14-7 lead, all the components were there for a full-blown Niners QB controversy. And hopes for a new RGIII-like QB suddenly becoming available on the waiver wire appeared dashed. But Brees immediately coughed up a pick-six and took the pressure off the struggling QB, who headed into the locker room tied instead of down two scores. Kaepernick finished with a solid second-half, restoring hope for down-trodden Brandon Weeden, Joe Flacco, Ryan Fitzpatrick and Ryan Tannehill owners everywhere. Kaepernick’s final stat line wasn’t overwhelming by any means, but an average passing day (16-25, 231 yards), looks fine when it’s added to 29 rushing yards and a rushing TD. Obviously if he’s available, grab him.

Speaking of QB’s: With nine touchdown passes in the past three games, Cincinnati’s Andy Dalton appears to be a definite QB add, but beware of his late-season schedule. Outside of his lovely Week 15 matchup with the lowly Eagles, Dalton faces Pittsburgh (105 yards, 1TD, 1 INT) in Week 7) and Baltimore (221 yards, 0 TD, 1 INT in Week 1) over his final two games.

If you were holding out hope that a healthy Rashard Mendenhall would cure your backfield ills, you better look elsewhere. Since his return from his Achilles injury, Mendenhall has had 11 rushes for 33 yards (against Baltimore in Week 11) and then four rushes for six yards Sunday against the Chargers. Worse, he fumbled twice in his four carries, losing one. Until Ben Roethlisberger returns, the only usable Pittsburgh offensive player is TE Heath Miller. Mike Wallace (one catch for nine yards) owners learned this lesson the hard way Sunday.

Ditto for Larry Fitzgerald: You had to feel bad for the guy Sunday as failed experiment #3, otherwise known as Ryan Lindley, followed in the familiar and unsuccessful footsteps of Kevin Kolb and John Skelton. In 52 attempts, Lindley managed to find one of the NFL’s most dangerous threats just three times for 32 yards.

Pain Alert #1 – You struggled through the Alex Smith era, watching him ignore your high-priced TE Vernon Davis, but last week’s explosion with Colin Kaepernick at the helm had you jacked about his prospects against the very leaky Saints defense. Wait, what the hell?! Did he get hurt? Vernon Davis, 0 catches, 0 yards.

Pain Alert #2 – Hillman or Ball? Ball or Hillman? Umm, no. It was Moreno. The under-achieving one scampers for 85 yards on 20 carries, filling in for the injured McGahee, while Hillman gets three carries and Ball none. Somewhere in Denver, the ghost of Mike Shanahan is smiling.

Pain Alert #3 – Your options were limited so you inserted Shonn Greene into your starting lineup in hopes he might at least snag a short TD. Greene actually rushed for a respectable 71 yards, but it was Bilal Powell who got the short TD plunge, leaving Greene owners with seven points.

Pain Alert #4 – Still remembering the 88-yard touchdown reception from RGIII in Week One, you held onto Pierre Garcon until two weeks ago when the medical reports became basically, “they’re going to have to cut that foot off.” Looking spry and pain-free, Garcon caught five passes for 93 yards and 1 TD. Someone else will be enjoying his chemistry with RGIII.

When Did He Become a Running Back? Can’t figure out what happened to Reggie Bush. Once the most-feared pass-catching running back in the NFL, Bush now has 24 catches in 11 games. In his rookie season Bush caught 88 passes, but this season he’s on pace to finish with 36. On the other hand, he’ll likely rush for over 900 yards.

Aaron Hernandez: C’mon man, again. After torturing your owners for nearly the entire year, you finally suit up – without Rob Gronkowski on the field – and you finish with two catches for 36 yards on a day when your team puts up 49.

One Response to The Cracked Rear View Mirror: Recapping Week 12 in Fantasy Football