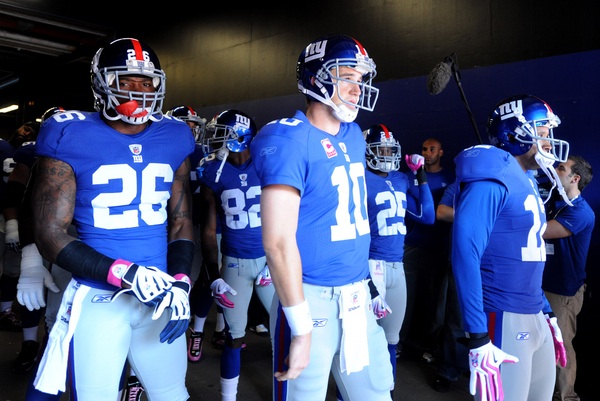 For those Danny Amendola owners annoyed at his fumble in the first minute of the game: I’m guessing 15 catches for 160 yards and 1 TD in the next 59 minutes kind of made up for it. Just for the record Amendola outgained the entire Jaguars offense (141 yards versus Houston). And he was only the third best WR of the week (see Nicks, Hakeem and Cruz, Victor below).

Last week I suggested you might want to wait for a big week from Roddy White or Hakeem Nicks and then sell them high since they’ve been supplanted by Julio Jones and Victor Cruz (11-179, 1 TD). Nicks’ 10 catches for 199 yards and 1TD just may qualify. Ditto for Roddy’s 8-102, 1 TD explosion last night. Jones dropped a first half TD, finishing with only 14 yards on 4 catches, so there’s some concern about his emergence.

It’s safe to drop Randy Moss if you took a flier on him. Clearly third behind Michael Crabtree and Vernon Davis, he may not even be ahead of Mario Manningham.

Ladies and gentlemen Michael Turner is still dead. Even with a 15-yard burst in garbage time, Turner had just 42 yards on 17 carries. On the other hand QB Brandon Weeden is not dead. Buried last week under an American flag and 4 INT, the resurgent one passed for 322 yards and 2 TD and almost led the Browns to a victory of the Bengals.

If you’re an Aaron Hernandez owner you might want to consider Baltimore’s Dennis Pitta (13-138, 1 TD in two games) or yep…Oakland’s Brandon Myers, who topped last week’s 5-65, with a 6-86 on Sunday. The only problem with Myers is that he’s on the Raiders and they are the least reliable fantasy players in the NFL, aside from Janikowski. Darren McFadden followed last week’s 13 catch performance with 2 catches Sunday for 19 yards.

Ronnie Brown, thanks for stopping by. When you’re outplayed by Jackie Battle and Curtis Brinkley it’s time to put together your broadcasting demo tape.

After another solid game by Alfred Morris (18-89), Coach Shanahan now has fantasy owners right where he wants them.

Things That Put My Remote in Danger

– Josh Morgan’s unsportsmanlike conduct penalty to take the Redskins out of field goal range late in the fourth quarter against the Rams: Anyone thinking free fantasy points in OT was thwarted by the bonehead move of the year to this point.

– Ryan Williams’ fumble with a minute remaining: Anyone facing Tom Brady, Steven Ridley, Wes Welker or Rob Gronkowski had to endure another full minute of pain with the Pats offense suddenly back on the field with a chance to win. It ended up being painless, but it had all makings of a true hosing.

– So much for Randall Cobb (1 catch for 20 yards and 1 rush for 28) being the next Percy Harvin. Maybe on a migraine day. Harvin (12 catches for 104 yards) is reaping the benefits of Christian Ponder’s refusal to pass the ball out of the backfield to AP (3 catches, 20 yards). Must start.

– Just a hunch, but I still think Sidney Rice is the one to emerge from the muddled Seattle WR corps. Despite averaging 3.5 catches and 35 yards (plus 1 TD) over two games, he’s looking more and more like the vacuum he was in Minnesota before his many injuries.

– Guess we need to hold off before inserting Coby Fleener (2 catches for 16 yards) into our starting lineup. Ditto for Donald Brown (12-45), but Reggie Wayne (6-71, 1TD) looks like late-round gold.

Pain Alert #1 – You read all the medical reports and even visited the San Diego Tribune blog and confidently included Antonio Gates in your starting lineup. Ummm, no. Maybe in the deepest of leagues, there were owners who were able to insert Gates’ backup into their lineup when Gates was scratched, but most were left without a tight end. Of course if you did make a change, you likely had Randy McMichael (3-29) instead of Dante Rosario (4-48, 3TD). According to CBS Sportsline, Rosario is owned in exactly 0% of leagues. At least the Ryan Mathews news was out in time to adjust, but it’s unlikely many had Jackie Battle (69 yards rushing, 2 TD) penciled in to take over for Mathews.

Pain Alert #2 – You trotted out your shiny new free agent or waiver wire acquisition Kevin Ogletree to follow up on last week’s monster performance and…1 catch on 1 target.

Pain Alert #3 – Still clinging to hope that Justin Blackmon would benefit from being on a Jacksonville team that will always be playing from behind, you inserted the projected #1 rookie WR into your starting lineup. Result: 0 catches on four targets.

Pain Alert #4 – With every highlight reel run, CJ Spiller put a dagger further in the heart of Fred Jackson owners. When Jackson returns, he’s at best splitting time with Spiller. It’s probably too late to get value for Jackson though.

And on a final note, is there anything worse than being a Bears fan and having to root for Jay Cutler (126 yards passing and 4 INTs)? The only one looking more sour than Cutler after each successive failure Thursday was a Cutler owner. Ooops, scratch that, perhaps a Brandon Marshall (2 catches, 24 yards) owner. Remind me again how Cutler landed the hot actress?