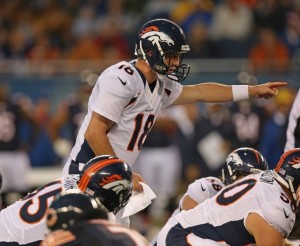 Whether your fantasy football playoffs start this week, or if this is the final week in the regular season, we here at NFL Soup will do our best to help you make some difficult decisions regarding tonight’s Thursday Night Football game. The Denver Broncos may be heavy favorites against the Oakland Raiders tonight, but there are still a few fantasy relevant players on the Raiders that can help you in Week 14.

Darren McFadden makes his return to the field tonight, after missing the past four games with a high ankle sprain, which only clouds the backfield situation in Oakland. Marcel Reece has been the benefactor with McFadden out, although his role won’t completely diminish, it’s still unclear how he will be used against Denver.

Let’s break down all the match-ups for tonight’s game in our Thursday Night Football Fantasy Versus Decision Maker for Week 14:

If you didn’t know by now, Peyton Manning is back. Manning is ranked 5th in fantasy points scored for quarterbacks after thirteen weeks, while also throwing the 2nd most touchdown passes with 29. He’s a no-brainier starter every week.

Oakland figures to be down most of the game, so Palmer will get his chance to put up decent numbers. In week 4 against the Broncos, he managed only 8 fantasy points and did not throw a single passing touchdown. I think Palmer can be a top-15 fantasy quarterback this week, but you’re not starting him over Manning. It’s Manning all the way.

With decent fantasy numbers in his last two weeks after taking over for an injured Willis McGahee, and a nice match-up this week against a porous Oakland run defense, Moreno could be in-line for another solid fantasy day. I suspect he gets 20-25 carries with 90 yards and a touchdown.

The cluster that is the Raiders backfield is a situation I want no part of this week. McFadden (ankle) is expected to draw the start at running back, however it’s a question whether his ankle holds up enough for him to make an impact. Reece (hamstring) was limited in practice all week but is expected to suit up tonight. I think the Raiders get down big early and are forced to pass more, in that case McFadden and Reece could put up decent receiving numbers

It’s Moreno over both Oakland backs, then I’d take McFadden slightly over Reece.

Demaryius Thomas is in a class of his own this week, and should be starting in every league.

Decker was as hot as a wide receiver can get earlier this season, as he scored at least one touchdown in five straight games but since then he has cooled off big time over the past four weeks. For me, I’m not too concerned, especially this week against a Raiders team that has given up the 3rd most fantasy points per game to receivers over the past five weeks.

Moore was also a trusty fantasy option through the middles parts of the season, but much like Decker, he has cooled off considerably over the past three weeks. He did get benched last week for dropping passes, although he is going to start tonight.

I like Decker over Moore, but I can see Moore having a good game as well even with Champ Bailey draped all over him.

With Brandon Stokley (hip,wrist) likely out tonight, Tamme figures to have another big role tonight. In week 13 Tamme received a team-high 13 targets while grabbing 9 receptions for 89 yards. While I don’t think he will get 13 targets again, I could see 80 yards with a touchdown in his future.

The king of junk time yards and touchdowns, Brandon Myers will definitely have a shot to put up great numbers once again. Last week he hauled in 14 balls (a franchise record) for 130 yards and a touchdown. Fourteen receptions is a bit optimistic this week, but I could see another 100 yard game with a score.

I love both of these tight ends this week, but I’ll take Myers over Tamme.

Denver scores a lot of points, and they are expected to tonight again, so starting Prater in most leagues seems like a good idea even with his five misses in his last twelve attempts.

Sea Bass continues to make field goals week in and week out. He has one of the best legs in the game and should see a few more chances tonight.

It’s not even a question. Denver over Oakland.