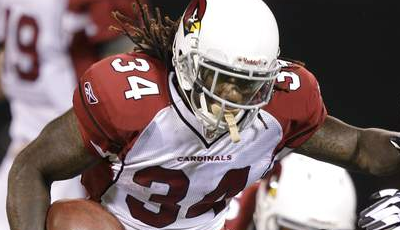 Ryan Williams still has the talent to be special.

Although it may not be the sexiest match-up for Thursday Night Football, the Arizona Cardinals and the St. Louis Rams will have plenty of fantasy football relevant players for week 5 in the NFL. Steven Jackson (groin) is the biggest question mark entering the game, but according to all reports he will suit up against a very good Cardinals defense.

Let’s take a look at some match-ups for tonight’s game in our Thursday Night Football Fantasy Versus Decision Maker for Week 5:

Arizona was forced to throw the ball a ton last week, thanks in part to the great run defense the Dolphins have. Kolb was able to complete 29 of his 48 passes for 3 touchdowns, which ties a career high. He likely won’t come close to those number this week, as the Rams are giving up the 8th least amount of fantasy points to quarterbacks this season.

The Cards have a great defense and I expect Bradford to struggle, he does against average defenses as well, so I’m going to take Kolb in this match-up.

As mentioned above, Jackson (groin) will likely suit up for tonight’s game. Jackson has yet to score double-digit fantasy points this season, and I don’t think he gets there this week either against a stout run defense in Arizona.

With Beanie Wells on the injured reserve list for the next handful of games, Williams drew his first start last week, but it didn’t go as well as fantasy owners would have hoped. Luckily for owners of Williams, he goes up against a defense that is giving up the 11th most fantasy points to running backs after four weeks.

I think Williams breaks out in a big way tonight, I’ll go with him over Jackson.

If you play in a standard scoring league, Fitz is the no doubter here, but if you’re in a full PPR league I think it’s closer then most people think.

Amendola has 9 more receptions then Fitzgerald as well as over 100 yards receiving more. St. Louis is going to have to throw the ball a lot and Amendola is there best option regardless who is covering him. I could see him with 10+ catches for over 100 yards and a score.

It’s Fitz over Amendola, but I like both players tonight.

With Todd Heap (knee) listed as questionable, Housler should see the majority of the targets tonight, as Heap did not practice in full this week. Housler looked really good in the preseason, and this could be his breakout game considering his big play ability.

Both of these tight ends have talent but have yet to show it during the regular season. You’re probably not starting either of these guys unless you’re in a 16-team or deeper league, or a two TE league, but if you are I like Housler more.

If you haven’t seen Greg “the leg” kick a field goal this year, I suggest you do. Last week he nailed a 58-yarder and a new franchise record 60-yard field goal, which would have been good from 65 yards plus.

Both should get a few chances at field goals, but I love me some Zuerlein.

Although St. Louis’ defense is on the rise, the Cardinals defense is elite right now, I’m going with Arizona over St. Louis.

4 Responses to Thursday Night Football Fantasy Versus: Cardinals vs. Rams