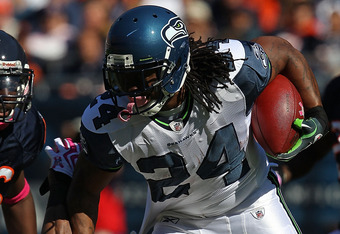 Was Lynch the biggest surprise in week 13?

First place in the NFC West will be on the line tonight, as the up and coming Seattle Seahawks head south to take on the San Francisco 49ers on Thursday Night Football.

If you like physical defensive close games, then this is the game for you. Both of these defenses rank in the top-7 in fantasy points scored, as well as in the top-4 in total defense in the NFL. Last week however, the Seattle defense only managed to score 4 fantasy points, while San Francisco’s defense could only muster up 2 fantasy points. I expect better outputs by each defense tonight.

Join us won’t you, as we break down the most important match-ups for tonight’s game in our Thursday Night Football Fantasy Versus Decision Maker:

It’s not a great match-up for either quarterback, as both defense have been very stingy against opposing quarterbacks this season. Smith struggled in two games last year against Seattle, with only 303 passing yards and zero touchdown passes.

This will be the first time Wilson will go up against the vaunted 49ers defense and he could be in for a long day, although he could posse a few mismatches with his athleticism out of the pocket.

I’m not a fan of either quarterback in this game, but I’ve got a feeling Wilson will create more opportunists in the pass/run game. I’ll roll with Wilson.

Neither running back was able to get anything going last week on the ground, but I expect tonight to be a different story.

Gore has always played well against the Seahawks at home, however Seattle is allowing the 2nd least amount of fantasy points to running backs this season.

If you thought the Seattle defense was stout against the run, the San Francisco defense has allowed the least amount of fantasy points to running backs this season. Lynch could have the tougher time of the two tonight, as the 49ers have allowed only one rushing touchdown this season.

The only way these two see significant playing time is if their team gets up big late and they decided to rest their horses. Neither player is recommended outside of the deepest of fantasy leagues and in that case I’ll take Hunter over Turbin.

In standard 10-team leagues, Michael Crabtree should be the only guy you’re starting tonight in a tough match-up, more so if it’s a PPR league. He should be lined up against Marcus Trufant who isn’t as physical as their other two starting corner backs for Seattle.

Although Crabtree is the number one guy, Manningham did receiver more targets last week. However, I wouldn’t look too much into it, especially tonight against a Seattle defense that has shut down a lot of good receivers this season. Moss is no more than a low-end flex option in the deepest leagues.

Sidney Rice has the best chance at having a big game and I would consider him a No. 3 WR  in most leagues. Tate has more value then Baldwin this week but I would not feel comfortable starting either receiver this week.

Davis hasn’t been getting the redzone targets like he was the first couple of weeks of the season, still though he is a top-5 tight end week in and week out.

Miller has zero fantasy value right now, so Davis is the easy choice.

Akers has uncharacteristically missed five field goals this season. Even with those misses he remains one of the more accurate kickers in the game, therefore Akers over Hauschka tonight.

Both defenses/specials teams should be starting in all leagues this week, however San Francisco’s defense has the huge edge in their front seven.