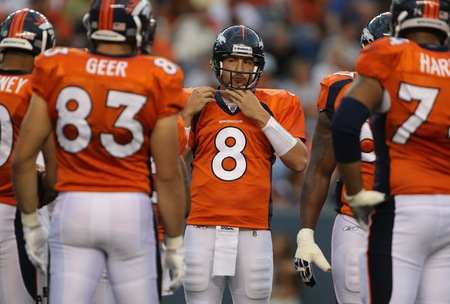 Orton should torch the Rams in week 12.

The 2011 NFL Fantasy Football Season should be one of the most exciting seasons we have seen in a long time.  With so many trades, free agents, and draft picks making an immediate impact on team rosters, it could take several weeks to figure out who is for real and who is just a one-week wonder.Week one is always a crap-shoot when it comes to who to sit and start.

Here are my best bets if you are in a bind and need a starter to get you sure points, or a normal starter who you should probably think about replacing.

Orton has been nothing but impressive in camp, and there is no reason to think he won’t continue that on Monday night against an Oakland defense that gave up the 8th most points last season to QBs, and that was with Nnamdi Asomugha. With a great rapport with Brandon Lloyd and a couple decent pass-catching RBs, he should have a good start to the season.

The Arizona cast-off has had an impressive pre-season for Washington, and should fit in nicely in Mike Shanahan’s offense. With Rex Grossman starting, expect a lot of touches for hightower, both running and short dump off passes.

Have no fears, Williams will be the featured RB for Carolina after getting paid in the off-season. Arizona gave up the 2nd most fantasy points last season to RBs, and with Cam Newton taking his first NFL regular season snaps, the Panthers will look to run early and often.

Williams isn’t the flashy, big play receiver that a lot of fantasy owners like to have. He is a pretty consistent player, and should be even better with Josh Freeman having a year of experience under his belt.  Williams is a safe play against a better, but still unproven, Lions defense.

With Lee Evans out of the picture, Johnson is clearly the Bills #1 wideout. Even after his infamous drop where he blamed God, Stevie should have a good year in Buffalo, regardless how good his quarterback is.  Against the Chiefs, he should have a good amount of targets in week one.

Pettigrew is going to be a stud tight end this year, and it will begin in week one. With a (for now) healthy Matthew Stafford, expect big things from the Lions passing game, and offense as a whole.  A lot of red zone trips could mean a 10+ TD season for the Lions TE.

Joe Flacco, QB, Baltimore Ravens
Flacco isn’t exactly what you’d call a “fantasy dynamo”, but his performances against the Steelers last season were decent. Still, though, he’s not a guy that is going to carry you to victory. A guy like Matthew Stafford or the aforementioned Kyle Orton would be a better bet in week one.

Blount had a great rookie season last year for Tampa, and will most likely have a great year again this year.  I am a little wary of the sophomore slump, and I think in Week One the Lions will focus on shutting down the run to make Josh Freeman beat them through the air.

Mendenhall will have teams constantly trying to pry the ball loose after the whole world saw the ball pop out after a Clay Matthews hit in the 4th quarter of Super Bowl XLV. Expect a stout Baltimore defense to shut down Mendenhall in week one.

Jackson missed part of an already shortened camp due to his holdout, and it is going to show on the field.  Still an explosive threat, Jackson and Vick are going to take a few weeks to get used to each other.

The Cowboys have a tough week one matchup, playing at the Jets.  Revis is going to shut down Miles Austin, and the Cowboys’ top receiver’s only shot at a productive fantasy day will be if he has one big play.

Normally, this would be a dream day for Dallas Clark against the Texans porous secondary.  However, with Peyton Manning doubtful, don’t expect much from any of the Colts major targets on Sunday.