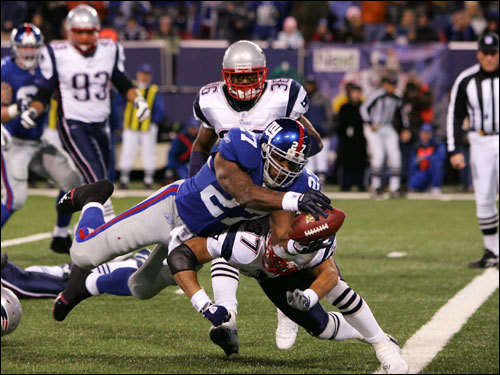 Tim Tebow got the starting nod from me last week in our week 10 Start/Sit column, and despite heavy criticism for his 2-for-8 showing, he was still good for 20 points. In our realm, that’s a good day.

We didn’t fare too badly the rest of the way in week 10, as Chris Johnson was a suggested start and he completely blew up against the Panthers, while Mario Manningham was very solid with six catches, 77 yards, and a touchdown. Chris “Beanie” Wells and Percy Harvin were our misses in the Start side of things.

As for the sits, we had a huge swing and a miss when we suggested benchings for Rashard Mendenhall and Larry Fitzgerald, as both players had a huge games. Our other three sits calls, though, (Josh Freeman, Dwayne Bowe, and Giants rushing attack), all lived up to their Sit label for the week.

That makes for a solid 6-4 record for week 10. Check out who we’re rolling with and leaving out of our fantasy lineups in week 11:

Moore is still pretty hit or miss when it comes to the numbers, but there’s no denying his very solid play the past few weeks. He’s helped Miami get two wins, and was the AFC player of the week in week nine. I love his chances to post quality numbers against a bad Buffalo Bills defense this week.

Jacobs wasn’t the worst play in week 10 considering he went up against the 49ers defense, and as long as Ahmad Bradshaw is out again this week, he’s a stellar play against the Eagles weak run defense. If Bradshaw is in the mix, Jacobs is a borderline Flex play.

Willis McGahee sounds like he wants to give it a go on Thursday night against the Jets, but he’s no lock to play. If he doesn’t, Ball should be in for a huge role, and either way, Ball should be in for at least 10 touches with Denver focusing on the ground game a ton. He’s a solid Flex play and should have a shot at RB2 numbers if McGahee sits out.

Moore erupted for over 100 yards and two scores last week against the Chargers, and was flirting with solid numbers earlier in the year. With Carson Palmer taking over, the deep-threat is back to solid production, and has a great shot at awesome numbers again in week 11 against a bad Vikings defense.

Nelson tends to be hit or miss from week to week, but he’s posted quality fantasy production in three of his last four contests, and he and Aaron Rodgers are really clicking right now. I don’t see him having much trouble against the Buccaneers at home in week 11.

Dalton has been a pretty stable fantasy option as a rookie, but starting last week, he entered a brutal stretch of games in which he’ll face tough defenses. The Steelers exposed him a little bit late in last week’s loss, and I don’t love his chances against the Ravens in week 11.

Blount hasn’t scored in his last three games and his yardage hasn’t been great during that stretch, either. I don’t like his chances to suddenly go off on the road against the Packers.

With just two scores on the year and lacking explosiveness, Benson needs a ton of carries to be effective and is completely hit or miss. His chances of putting up quality production in week 11 lessen even more with a matchup against a usually tough Ravens run defense.

I like Decker’s skill-set and production over the course of the season, but there’s no denying his cap with Tim Tebow under center. Toss is a matchup with either Darrelle Revis or Antonio Cromartie, and this is definitely a guy to avoid this week.

Williams is still living off of his rookie season, but the guy is averaging just four catches and under 50 yards per game in 2011. The Packers are looking better against the pass, while Williams has scored since the first game of the season. You can’t like his chances this week.