Week 13 Fantasy Football Buy or Sell: All Aboard the Kaepernick Train 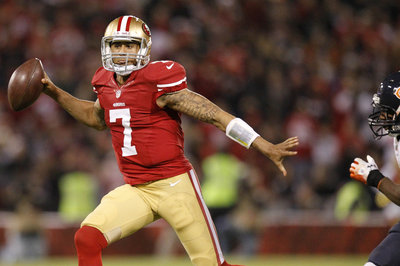 Could Colin Kaepernick be this year’s Tim Tebow?

As the NFL playoffs near, so are fantasy football playoffs, as there are just a few weeks left in everyone’s league. Because of that, I’ve shortened up the buy or sell lists this week, and wanted to focus more on the guys that you should look for to help your team out over the next few weeks as you make that playoff push.

After back-to-back victories against the Bears and Saints, the Colin Kaepernick era has officially begun in San Francisco. Head coach Jim Harbaugh is not going to be going back to Alex Smith (barring an injury to Kaepernick) and he might still be available on the waiver wire in some leagues. In the past two weeks as the starter, Kapernick has completed nearly 67% of his passes, throwing three touchdowns to one interception, while rushing for another score as well. And with favorable matchups the rest of the season against the Rams, Dolphins, Patriots, Seahawks and Cardinals, Kapernick’s not only worth picking up, but starting as well.

Now I was selling Jennings earlier in the season because of his injury, but I’m buying him now for one reason: no one expects him to do anything. Look, Jennings has been out for awhile, but now that he’s finally returning to Green Bay’s lineup doesn’t mean he’ll get double-teamed from the get-go like he’s used to. Opposing defenses are still going to be keying Jordy Nelson, James Jones and Randall Cobb, leaving room for Jennings to get some catches and make some big plays. At the very least, pick him up and see what he does at home this week against the Vikings and decide his value from there.

Wilson will get the opportunity to spell Ahmad Bradshaw with the seson-ending injury to Andre Brown. And though Bradshaw still gets the bulk of the carries and yards in New York for the Giants, one thing to look at in regards to Wilson is the touchdowns that Brown got. While spelling Bradshaw, who has five touchdowns on the season, Brown has eight on the season, including a rushing touchdown in each of the past five weeks. In that same span, Bradshaw had two. So the fact that Bradshaw’s backup has had more rushing touchdowns as of late could be enough reason to pick up Wilson and see what he does.

McFadden has irritated me all season long, and honestly, I would’ve released him weeks ago if he wasn’t on my “can’t cut” list. But in all seriousness, to those out there that are thinking that McFadden will come back from injury and light the field up, let me tell you this: he won’t. He hasn’t played in a month, the Raiders aren’t playing for anything at this point other than pride, and he has two rushing touchdowns and two 100+ yard games this season. Use that roster spot for someone more valuable (or with a higher potential of scoring points).

I might catch some heat for selling Brees, but it’s not because of his zero touchdown, five interception game against the Falcons; I have good reasons to sell him over the next few weeks. Look, the Saints are 5-7 and basically need to win out over their next four games to even have a chance at making it to the playoffs as a wildcard team. The thing is that, the Saints play the Giants and Buccaneers over the next two weeks, and both those teams have better, more realistic shots at the playoffs than the Saints. But those are going to be must-win games for the Saints, who live and die on the right arm of Brees, and he’s going to be airing it out a lot. The Giants and Buccaneers both have solid secondaries, good pass rushers and, overall, opportunistic defenses, which can easily increase Brees’ interception total on the season.

I sold Rivers not too long ago, and he’s back on the list again this week, after finally being able to not throw an interception this month. In the past four weeks, Rivers has thrown eight touchdowns and five interceptions, with the Chargers going 1-3 in that span. Over the next two weeks, Rivers faces tough secondaries against the Bengals and Steelers, and there’s no guarantee he’ll do much better when he faces the Panthers, Jets and Raiders to end the season. So for as much of a passing machine Rivers has been in recent years, he’s simply turning the ball over too much this season (18 touchdowns to 14 interceptions).