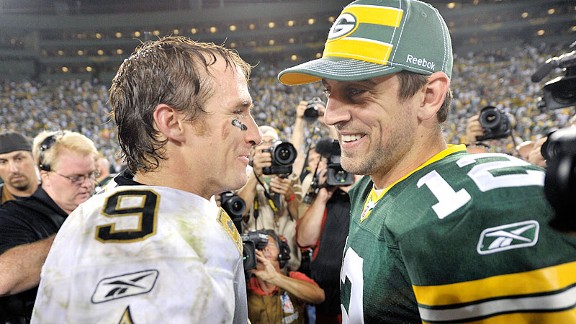 Rodgers won’t have much trouble topping Brees this week.

Week 13 in fantasy football got off to a rocky start, especially when it comes to fantasy football rankings. Drew Brees and his no touchdowns and five interceptions had a lot to do with it. Roddy White, Jimmy Graham, Matt Ryan and Julio Jones handing in pedestrian efforts, did, as well.

That Thursday Night Football game between the Saints and Falcons was supposed to be a fantasy owners’ dream. Week 13 of the fantasy season is a crucial week. You’re either a week away from the playoffs, or you’re using this week to secure your spot. This is the absolute worst time for two great offenses to play like the New York Jets.

But that’s what happened. And if you used any of the said individuals in your week 13 fantasy lineup, you might be wiping away tears as you read this. Regardless, you still have roster spots to nail down for the week, and you still have hope to escape with a much-needed victory. To help ease the pain and help you make the right calls, I’ve prepared my week 13 fantasy player rankings.

Before you dive into the rankings, check out some quick notes on each position:

Where Matt Ryan and Drew Brees failed owners in week 13, I confidently believe Aaron Rodgers, Tom Brady and Peyton Manning will succeed. But you already were banking on that. Rounding out my top-10 are Eli Manning, Colin Kaepernick and Matthew Stafford. Stafford is pretty self explanatory, as the Lions air it out more than just about anyone and Indy isn’t a great defense. I like Eli and Colin more, however. Eli got his mojo back against the Packers last week, and should destroy a weak Washington pass defense on MNF. Kaep is the official starter in San Fran, and his dual talents make him a threat to be the next Tim Tebow in fantasy circles. In a sense, anyways. I like him a lot this week, even with the Rams being a worth opponent.

Marcel Reese owners cry and Darren McFadden ownes rejoice. I don’t know how to gauge Run DMC’s value, but it’s better than Reece’s at this point, and he has a fairly high ceiling if all goes well. That is, if he even plays. Be sure to stay up on McFadden’s status. Elsewhere, I don’t think it’s possible for Chris Johnson to demolish Houston’s run defense twice in the same season. On the flip-side, Beanie Wells should crush a bad Jets run defense. That’s what the paper tells us, anyways.

Roddy White and Julio Jones burned me and probably you, but I’m not scurred. I still think Calvin Johnson, A.J. Green and Demaryius Thomas end up putting up top-5 numbers. I’m high on Andre Johnson and Victor Cruz due to sick matchups, while it’s tough to go against Dez Bryant these days. I know Brandon Marshall gets targeted like crazy, but he’ll have his work cut out for him against physical Seattle corners. On a sadder note, God help Larry Fitzgerald.

Aaron Hernandez should kill it against a weak Miami pass defense if he takes the field. Elsewhere, Vernon Davis should soar with Kaepernick in the lineup, while Jason Witten could carve up Philly. Antonio Gates has been all too quiet for most of the year. I think it’s time he has a solid game. I’m quietly high on Jermichael Finley, who woke up two weeks ago and could have a solid game against the Vikings at home.