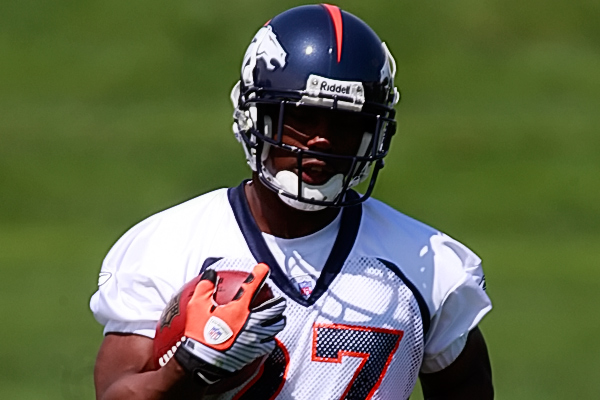 We’re a little late on our week 13 waiver wire, thanks to our site going down yet again. We’re back and here to stay, so now it’s time to find out who’s hot and worth spending a waiver claim on before the week officially gets started with tonight’s TNF game. That’s the question. Who is the guy that can plug up that iffy spot in your lineup and get you into the playoffs? We got you covered right here:

Took over the starting role via injury to QB Alex Smith and has been nothing but electric for the 49ers. He’s been very productive and adds another dimension to the 49ers offense ’cause he can run.

The Jaguars have been throwing the rock around a little more and Henne had some highlights last week. Cecil Shorts has been dynamite at WR as of late and Buffalo is always confused in the secondary.

He might be the hottest name right now and could fill your flex or running back spot nicely this week. The Buccaneers are vulnerable against receiving running backs so in a PPR league Moreno is a solid option.

Rodgers saw a majority of snaps last week and looks to have solidified a timeshare with Michael Turner. Rodgers is extremely explosive and this week against the Saints could be a breakout. He’s a good flex fit this week.

He will get the starting nod this week against the Ravens. With Roethlisberger likely out the Steelers will rely on him to keep some offensive pace in the running game. The Ravens pose a tough front but showed last week they are vulnerable.

This guy is playing extremely well and getting a ton of targets lately. With the Patriots coming to Miami this week I gotta think Miami has to throw a ton. Look for Bess to have a ton of opportunities.

Starting to find his role with the Bengals. Andy Dalton has been finding him as of late as he has four TD’s in his last three games. Solid option this week against San Diego.

I had him in here last week and he didn’t disappoint. He has a nice matchup against the Chiefs this week and Cam Newton has been playing better. Should have another nice day as all attention will be on Steve Smith.

It’s hard to like anything to do with the Jets right now but if there’s one spot that might come through against Arizona this week its at TE. I think the Jets will have some redzone opportunities and Keller will probably be option #1.

His targets have risen along with production now that Chad Henne has been starting at QB. Take that with a nice matchup against the Bills defense this week and he could be a nice fill-in if you need it.

Tough matchup vs. Houston but opposing TE’s have faired pretty well against the Texans. Cook saw 6 catches on 6 targets last week. That to me is momentum and confidence with QB Jake Locker. I like it!

Pretty good matchup against Oakland this week. Gotta think Cleveland will find themselves on Oakland’s side of the field a lot. That should be more opportunities and points for Dawson.

With a matchup against Denver this week I think the game is close and could be decided by some long field goal attempts. Barth has a boot so the 50 yarder might be in play.

Had a fantastic effort last week against the Steelers and now take on and Oakland team that loves to turn the ball over and shoot themselves in the foot.

Remember what the Cowboys did to the Eagles in week 10? They dismantled the Eagles. Now they get ‘em at home and Eagles’ QB Nick Foles has looked like a rookie. Could be another nice day for the Cowboys D.