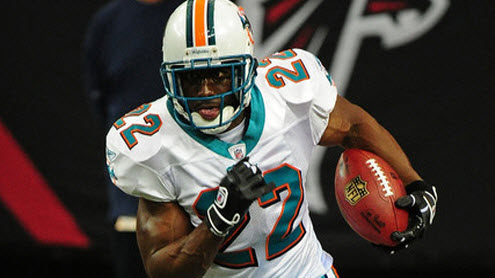 Should you start Bush against the 49ers this week?

Week 14 is a brutal time to make fantasy football decisions on your own. In that same breath, with the fantasy football playoffs alone hitting you like a ton of bricks, it’s not always the best thing to get too much advice. Your hosting league always has something to throw at you (Yahoo, ESPN, etc), the guys in your league, your bro-in-law, the forums, and even the smaller sites like me. And we’re not even getting into Twitter, Facebook or the dangerous realm of your own damn conscience yet.

But that’s why our Fantasy Football Decision Maker column exists and works. We pit several guys against each other at all the major positions, to give fantasy owners another avenue to stroll down before they make their final lineup decisions. That doesn’t mean we’ll always be right, but at least you’ll get our dose of logic and see it from another angle. We try our best to pick fantasy matchups that make sense – ones that you actually might be struggling with, and come away with a clear-cut fantasy decision.

With the fantasy playoffs starting and your season on the line, I’m going all-out in week 14. Check out the various fantasy calls I’m dissecting, and if I don’t touch on a specific fantasy decision you need help with, feel free to hit me up on Twitter @NFLSoupKevin. In the meantime, here is your week 14 fantasy football decision maker column:

Ryan has two touchdowns to six picks in his last three games and faces a Panthers pass D that has been surprisingly effective in 2012. Luck also throws picks, but is coming off of a monster game and has a delicous matchup with the Titans. Normally I say stick with your studs, but the writing is on the wall. Go with Luck.

Manning faces a Saints defense that is getting better, but still isn’t very good. RG3 faces a Ravens defense that still might have Terrell Suggs, but he’s less than 100% and this defense isn’t what it once was. Manning has been shaky overall over the past several weeks, while RG3 routinely gets it done for you. There’s no sense in shying away from RG3 now, even with a relatively questionable matchup. I’m sticking with Griffin III.

A lot of people are down on Romo against the Bengals this week, and it’s understandable, as the Cincy defense has been pretty tough lately. However, most of their solid performances have been against pretty weak teams (save for the Giants). I actually like Romo with his back against the wall, while he’s been red hot lately. Freeman is a sound alternative, and the Eagles are a great matchup. I think either will do well, but I’m going to ride out this run with Romo.

Both guys have good arm strength and elite athleticism, but Kaep clearly has the better matchup this week. I also think Kaep didn’t come close to living up to expectations last week, and could really turn things around against a weak Dolphins pass defense. Wilson is the better traditional passer and has proven himself more over the past few weeks, but Arizona can be a deadly matchup. Both guys have upside, but I think Kaepernick is set up for a huge week. I’m rolling with Kaep.

Morris has turned in two 100+ yard performances, while Brown has blown the lid off the league in his last two starts. Both guys are in for great roles this week, but also have tough matchups on paper. I prefer Brown here, as he’s more explosive and I can’t go against his hot roll.

Beanie Wells was solid in his return two weeks ago (two scores), but fell apart last week and is now nicked up again. I much prefer Ballard, who faces a weak Titans defense and is all alone in Indy’s back-field this week with Donald Brown ruled out.

Two huge names in fantasy that just don’t get it done on a regular basis. Mathews literally has zero 100+ yard rushing games and just one touchdown in 2012. He faces a tough Steelers defense this week, too, so I don’t see any logic that points to him. I know Turner is slowing down and losing touches to Jaquizz Rodgers, but at least he scores. Facing a bad Carolina run D certainly doesn’t hurt, either. It’s an easy pick – Turner.

Bush is clearly the more explosive back, but he’s been struggling with his health and the proper amount of touches all year. Throw in a matchup with the 49ers, and I can’t buy him for week 14. Leshoure gets a banged up Packers defense and and has scored once in each of his past three games. I’ll take Leshoure.

Givens has proven he can do it all – make big plays or do his best Danny Amendola impression. While that’s tempting, Gordon deserves a look, too, as he dropped 100+ yds and a TD last week and gets a shaky Chiefs D in week 14. I really like both guys this week, but I have to lean to Gordon just because he’s Cleveland’s #1 man and I feel a roll coming on.

Alexander has put up some solid efforts and is clearly the main offensive threat in San Diego. That’s awesome, but he faces a tough Steelers pass defense this week. However, top corner Ike Taylor is shaky and might even miss week 14. Hilton has been very solid over the last several weeks and has a killer matchup with the Titans this week, so you’ve got a tough call on your hands. To me, this hinges on Ike Taylor’s status. If he’s a full go, I’m riding Hilton. Otherwise, roll with Alexander.

No Jordy Nelson this week means more balls to go around in Green Bay. Jennings was pretty quiet in his return from a groin injury (4 rec, 46 yds), but Cobb hasn’t exactly been blowing it up the past two weeks, either (10 rec, 101 yds, 0 TD). With Nelson out, a healthy Jennings is the guy to play against Detroit.

Jones will see a solid amount of targets with Nelson out (see above), but this is still a battle considering Garcon looks as healthy as he’s been all year and now has 86+ yards and a touchdown in back to back weeks. While Jones will be tempting, I think you have to go with Garcon. His matchup isn’t the best (Ravens), but he’s getting it done and you know RG3 will throw to him routinely.

I know neither of these guys are all that reliable, but I like both to have solid games this week. Finley has been the better play the past two weeks and scored against Detroit the last time he met them, but I’m actually rolling with Davis. His matchup with Miami is solid and he’s simply due for a good game.

Both of these guys have been solid lately, but both also struggle to get more than 4-5 balls a game. They’re not elite, but you can do a lot worse. Their teams face each other this week, and the matchup bodes well for Gresham over Bennett.

Rudy is scoring touchdowns and racking up catches again (18 rec and 3 TD in last three games), while Pitta is back to his inconsistent ways. Pitta has the better matchup by far, but Rudolph is getting it done consistently and scored against the Bears in the first meeting. I’ll chant Rudy! on Sunday.

Chandler is a TD threat and nothing more, while Keller’s moderate talent is being held in check by his own offense. Keller has the better matchup but these guys rival each other in production, so I have to lean with the guy more apt to score. Chandler is the call.

Miami takes on the 49ers while the Browns welcomes the Chiefs to town. Not much to think about here when Brady Quinn is a part of the mix. I’m taking Cleveland.

Dallas has been questionable on D and faces a pretty solid Bengals offense, while the Chargers have been solid on D and get the Steelers with Big Ben returning. I know the Cowboys have been shaky, but the Chargers are just a mess. I’ll give Dallas a chance here.

Minnesota welcomes the Bears to town, while the Rams take on the Bills. Jay Cutler can always get lost in a flurry of interceptions, but I doubt that happens. Minnesota will be a decent D to use, but I much prefer the Rams against a skittish Ryan Fitzpatrick.

Both defenses can be elite when they want to be, while both have stiff tests against explosive offenses (Saints and Texans, respectively). Normally I’d go against New York here because they look like they’re ready for another late-season collapse, but I can’t see New England’s pass defense stopping Andre Johnson and Owen Daniels. I’ll take the Giants here by a hair.

Again, if your fantasy decisions weren’t helped or solved via this column, I will gladly take your questions on Twitter @NFLSoupKevin, or you can stop by our Sunday morning chat!