Week 14 Fantasy Football Risers and Fallers: DeMarco Murray is Back 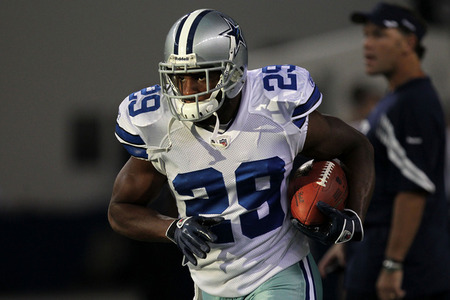 Murray made his return in week 13.

With most trade deadlines already passed and the fantasy playoff picture also set for most fantasy football leagues, it’s too late to trade for these stars or pick up gems on the waiver wire at this point.  You either have a good lineup or you don’t.  That doesn’t mean you can’t tweak your lineup to maximize your roster’s potential for the next few playoff weeks.  Many of the risers and fallers below have to do with injuries or late-changing circumstances, but they are risers and fallers nonetheless, worthy of roster changes as you make your fantasy playoff push.

For those of you who stayed faithful with DeMarco Murray after he missed six games, he seems to be coming back at the perfect time for you. Many owners sat Murray though on Sunday because of word that he would be limited in his first return back, but Murray looked strong.  Murray totaled 83 yards and tacked on a score while also adding four receptions.  He should be ready for a full workload against the Bengals this Sunday.

Hernandez was targeted 13 times, finishing with 8 catches for 97 yards.  With Rob Gronkowski and Julian Edelman out, Hernandez will get his fair share of targets moving forward since it seems Hernandez is fully healthy despite a lengthy injury that sidelined him for most of the season.  Hernandez, despite not scoring on the day, was targeted early and often in the redzone.  It seemed like Head Coach Bill Belichick had the game plan to target Hernandez particularly in the red zone early on in the game.  Hernandez will get you those scores; just be patient.

Green-Ellis passed the century mark for the third straight week with his 118 yards performance Sunday against the Chargers.  He has also averaged 5 yards per carry over that stretch.  With the ailing Cowboys’ defense up next, Green-Ellis is a solid starter as you enter the first round of playoffs.

Moreno seems to be the exclusive lead back in Denver with Willis McGahee on IR.  While rookie Ronnie Hillman only had five carries, Moreno rushed 20 times for the second consecutive week that he has been the starter.  Moreno has averaged about 75 yards in the last two games and has also added on several catches.  If desperate, Moreno can sneakily get you some points, especially against the Raiders defense this upcoming week.

Matt Forte was healthy and had 24 carries for nearly 100 yards.  That means that those of you who picked up Michael Bush last week hoping Forte may be out for a while have only picked up the same ‘ol Bush who will only get a handful of carries each game.  Bush had only 7 carries for 39 yards Sunday.  Expect more of the same with Bush.

Davis caught only two passes for 15 yards on Sunday and that is 2 catches and 15 yards more than the week before.  It’s no wonder that Davis publicly supported Alex Smith starting at quarterback over Colin Kaepernick.  Kaepernick simply doesn’t look Davis’ way.  Davis can’t be trusted in a starting lineup averaging only 2 catches and 27 yards in the last six games.

Beanie Wells’ two touchdown performance in Week 12 seems to have been a fluke.  Against the weak Jets run defense, Wells had 15 carries for only 22 yards.  Many owners were skeptical of LaRod Stephens-Howling’s timeshare with Wells but it was William Powell who got nearly as many carries as Wells Sunday.  With Seattle’s defense up next on the schedule, don’t start Wells unless you’re in a serious bind.

LaFell has been wonderful for fantasy owners lately, with 22 targets in the last three weeks.  LaFell only had two catches on Sunday for 14 yards then sprained his foot late in the game.  LaFell moving forward is a risky start even if he is able to go with his foot since he’s not at 100% while Cam Newton and even Steve Smith have seemingly re-gained their groove late here in the season.